If Pluto is a dog, then what is Goofy? Can cartoon dogs talk or not? What would it be like if Goofy was the owner of Pluto and tried...never mind. 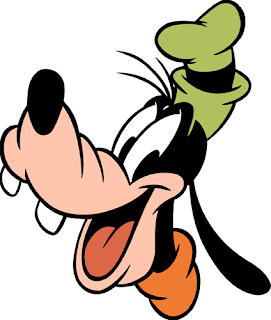 It reminds me of the joke about the talking dog, of course. A man is walking past a bar, and sees a dog sitting quietly out front with a sign that says "Talking Dog $10." He stops and asks "Are you really a talking dog?

The dog sighs "Yeah, I've been a talking dog all my life. It's led to some interesting times.  I taught myself to understand several languages, and got hired by the CIA. They'd bring me along for high-level discussions all over the world.  And no one suspects the dog, right?  I'd listen in to what they were saying when they thought no one understood and report back.

"But I got tired of the travel and the pressure, so I came here and took a job at the airport listening in for terrorists and smuggling.  It was a good life, really, but the hours were terrible.  So I got a severance package and settled down with a wife and some puppies here in the city."

The man goes in and says to the bartender "I saw the sign for the talking dog."  The bartender, looking annoyed, says "Yeah, you want him?"  The man says "I don't know, but is he really only $10?"

"But this is amazing! Why so cheap?"

"Because he's a liar.  He's never done any of that shit."

Or the old risque joke about why Mickey is divorcing Minnie ...

I told this joke twice tonight to different audiences, and it was well appreciated on both occasions.

My father, who remembered more jokes than anyone, told me that was the key to remembering a joke - tell it right away.