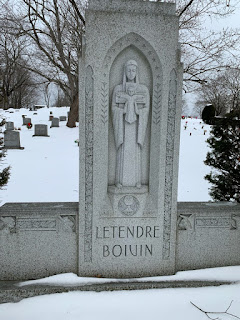 I mentioned the monuments in Mt Calvary Cemetery on Manchester's West Side in Modern Anthropology a few days ago. Yesterday I noticed this one, which I had passed a half-dozen times without noticing. The central figure is Mary holding the infant Jesus, but it is a bit unusual, with arms outstretched to suggest a cross, but no nails. Beneath her is the communion cup and wafer with a Chi-Rho on it, the first two letters of "Christ" in Greek. Surrounding her is an archway with a flowering plant going up the sides topped by fleur-de-lis, commonly associated with France in heraldry and symbolism. (Thought to be a lily but probably an unrelated Flemish flower that grows wild near the Rive Lys.) It is even more commonly used for Quebec, and is on its flag. Above the flowers is and archway with many stars.  The whole effect of that is much like the Door of Moria in Lord of the Rings.  Unsurprising, as Tolkien used much medieval European symbolism and was Catholic himself. I imagine this would look less odd to him than it does to me.

Across the bottom are four figures in profile: a human, what looked like an animal with some headdress (later identified as a winged lion), what I thought was a bull (it's a winged ox), and an eagle. I vaguely recalled that symbols like this were used for the Four Evangelists, so it was easy to look this up and correct my impression. I don't know if these are especially common in French or French-Canadian representations.

But there is the problem I referred to in my last post.  Less than a century later a person moderately informed about Catholic symbols is uncertain about bits of this. In another century who will know?

I am enjoying paying closer attention to what I am seeing.  I have previously contented myself with noticing the French surnames, many of which are familiar to me since childhood. This looks more stimulating and less nostalgic. I am also going to pay more attention on Memorial Day weekend to what symbols were used in the Swedish section of another cemetery across town, where most of my own relatives are buried.

Update: I figured out from other stones that the communion cup and wafer denote a priest. If there is a year on it, it refers to the date of his ordination.

I hadn't noticed the stars in the picture till I read your text. There are 12 of them.

Ahh. Presumably either the Apostles or the Tribes