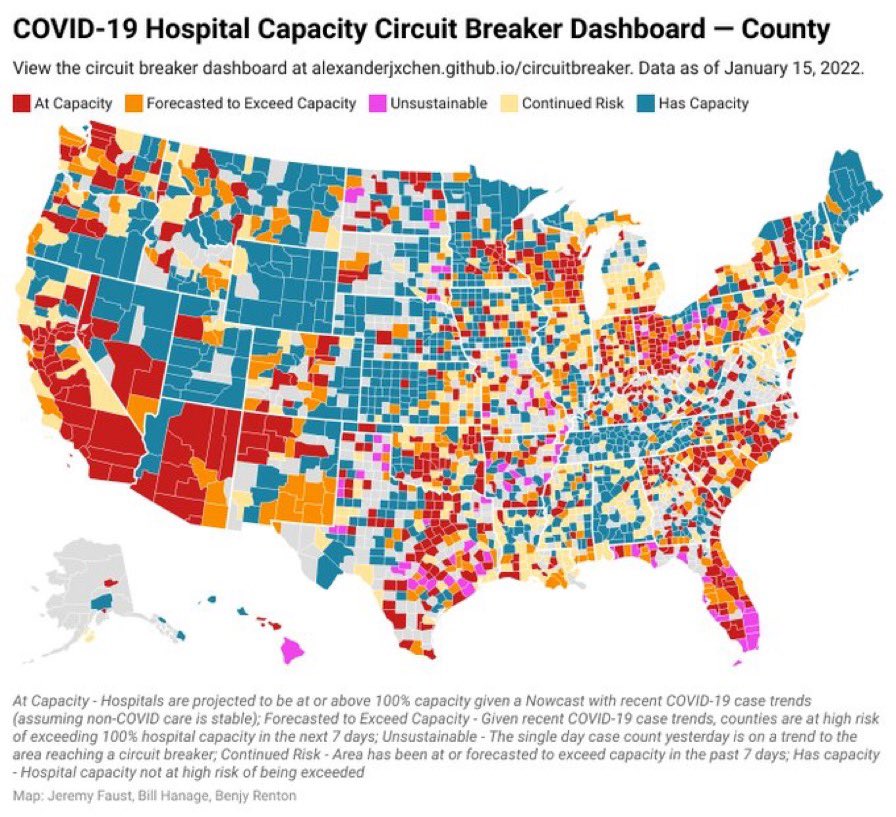 There is also capacity by state at the link.
Posted by Assistant Village Idiot at 10:34 AM

Appears to be a bit out of date, if my own county is an indicator. It has us as 'at risk' while in fact all 3 of the larger hospitals in town are at 100%. We are not quite stacking them in the halls, but we only admit a patient if we can discharge one. This is in Northern Illinois.

Sorry, that should be 'continued risk'.

The site I got this from, the ER doc Jeremy Faust, says that they have received zero complaints that that they have overcounted a county, but a fair number saying, as you have, that they may be undercounting.

I will note that what they call merely "continued risk" is still a worrisome amount.

Ours are in blue on your map, and I hear they’re about a third as taxed as last year. I do have some suspicion that there may be some serious triage going on, though, with admission being made only for genuinely serious cases — some ~60 last week, with Omicron here three of four weeks now. As I mentioned, we don’t have the personnel even though we have plenty of beds.

That said, it has now been over a year since we had a COVID death in this county. Even the very serious cases all recover. Someday someone might figure out why that is. It’s not because of intensive medical attention; it might be lucky genetics in the population, or more sun exposure being common, or humidity being helpful somehow. Or it may be we really don’t get it yet.

There may be too many moving parts to answer that yet, but that sure is the sort of thing we need to learn the answer to. I am sure theories abound, some possible.