They aren't mentioned for very long.  Here are the relevant texts.

Now there was a man in Jerusalem called Simeon, who was righteous and devout. He was waiting for the consolation of Israel, and the Holy Spirit was on him. 26 It had been revealed to him by the Holy Spirit that he would not die before he had seen the Lord’s Messiah. 27 Moved by the Spirit, he went into the temple courts. When the parents brought in the child Jesus to do for him what the custom of the Law required, 28 Simeon took him in his arms and praised God, saying: 29 “Sovereign Lord, as you have promised, you may now dismiss[d] your servant in peace. 30 For my eyes have seen your salvation, 31 which you have prepared in the sight of all nations: 32 a light for revelation to the Gentiles, and the glory of your people Israel.” 33 The child’s father and mother marveled at what was said about him. 34 Then Simeon blessed them and said to Mary, his mother: “This child is destined to cause the falling and rising of many in Israel, and to be a sign that will be spoken against, 35 so that the thoughts of many hearts will be revealed. And a sword will pierce your own soul too.”

36 There was also a prophet, Anna, the daughter of Penuel, of the tribe of Asher. She was very old; she had lived with her husband seven years after her marriage, 37 and then was a widow until she was eighty-four.[e] She never left the temple but worshiped night and day, fasting and praying. 38 Coming up to them at that very moment, she gave thanks to God and spoke about the child to all who were looking forward to the redemption of Jerusalem. 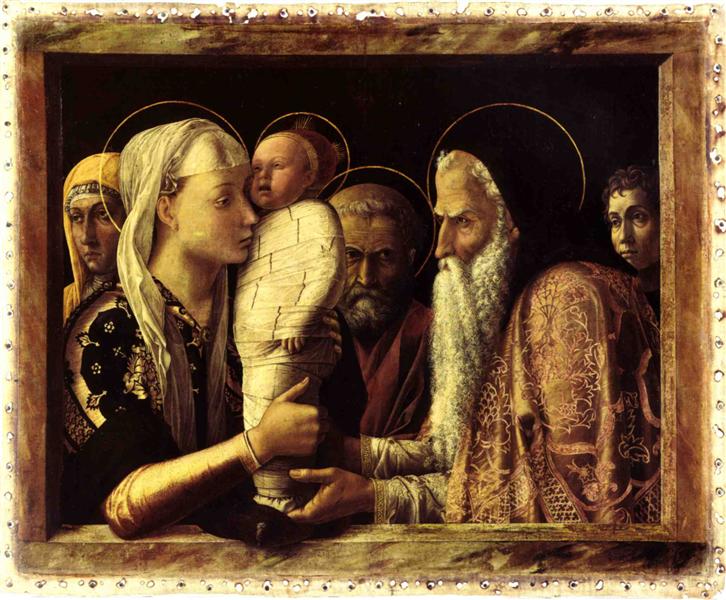 I intentionally chose a depiction which goes against one of our assumptions about the Presentation of Jesus.  No one looks at all happy here, which is strange.

Anna was a prophet who lived at the temple. There is very little backstory. She recognises something about who the child Jesus is - we are not told how. It is also nonspecific.  We think it has been revealed to her that he is the Messiah, but that may be because we already know that and leap to that conclusion. The phrase "all who were looking forward to the redemption of Israel" also suggests this, but again, that could be an assumption imposed from without, by Luke or by us. She knows there is something special about this one. We don't know if she knows Simeon or who she later compares notes with, but she does come up at the moment that Simeon finishes speaking. This seems straightforward, without much room for interpretation.

Simeon is a different matter. Artistic images from many centuries depict him as old. The text does not say that. We take the suggestion first from his association with Anna. His words sound like the sort of thing an elderly man would say. "You may now dismiss your servant depart in peace,"  is the modern equivalent of "Now I can die happy." But I've said that after special events for years myself.  That may not be very common, but I can't be the first person to think of it. It is not a thing that would generally occur to a young man, but a moment that joyful could bring that thought to someone at any age. There is lastly the phrase he was told he would not die until he had seen the Messiah. He would have to be beyond youth for this to have much impact. Yet he would not have to be old. It provides more poetic feel - and we like poetry - if he has been waiting for many decades. It says he was waiting for the consolation of Israel. That seems more impressive if it is fifty years instead of ten. Yet there is just a bit of imposing our impression of what we think God should do rather than sticking with the text. It seems a better story if he were told this fifty years ago and held the thought, seeing it fulfilled after long faithfulness. So we think God must have done that. I think so too.  When we did it as a skit we gave him dialogue befitting an old man who had been coming to the temple daily, or at least frequently, for many years. But it's not in the text. He could be forty and been told when he was thirty he would not die until he saw the Messiah. That could still cause one to exclaim "Ah, I can die a happy man now, God."

That Luke learns his story even suggests he is not old. He would at minimum have to have learned from people who heard Simeon tell the story and were interviewed to have it written down in note form. It was more than 30 years before anyone would have even thought to write anything about Jesus down, and 70 years before the final composition. While it is possible that someone in AD 40 a single person said "There was an old man Simeon who used to tell the story of seeing the Messiah in the temple, but he died thirty years ago," it would be more likely to be remembered if it were multiple people who had heard the story much later.  We would have Mary's testimony, at least at first after Jesus's resurrection, but we still don't know from the text whether she knew of the earlier prophecy and the command of God that day. She may have only known that this guy came up by surprise at the temple and said prophetic things about how important her baby was to all of Israel. They may have spoken no further. There may have been only one source for the story, a person who had heard it from Simeon decades before who wanted to make sure it got included in the church memory and so got it written down in the collections of sayings and stories of Jesus that were the source for later writers.  God has done stranger things and might choose to have this hang by a single thread for years. Or it may have been a dozen witnesses to Simeon's story after. We don't know.

We also don't know that he came to the temple every day, or even frequently. "Moved by the spirit he went into the Temple courts. That could have been as late as that morning. "You will live to see the Messiah" and "Go to the temple" can be quite separate. It could have been that morning. If you have it rolling around in your head that you will see the Messiah you likely would never be out of reach of the temple, because you would reason that would be the most likely place to see him. But it wasn't included in the original directions (that we know of). Nor do we know he was expecting an infant. I always thought so, but that comes from our knowing the rest of the story. We know it was a baby, first brought out publicly at the temple, so we assume Simeon, having received some prophecy about him, must have known that too. But again, it's not in the text. That was the first break in the traditional expectations for me years ago, when we were writing the skit. It occurred to me that Simeon might also be surprised that it was a newborn.  Like everyone else did. We made that moment of chuckling surprise part of our script, as Simeon caught a whiff of God's humor. "Ahh, a baby! I see I have been making assumptions!" If he was actually old he would now know, perhaps for the first time, that he was not going to live to see the victory of the Messiah, only his arrival. He would be the first. And that might have been a large part of the lesson he shared with those he told. We have to expect the unexpected. It would be a different ending for him than he imagined, now knowing that the Messiah's arrival was not a large public event.

He may not have known where Jesus was born or where he was going back to.  While it is possible he talked with Mary and Joseph and learned a great deal, it is also possible that this all emerged slowly.  He would certainly then be alert for any crazy story about shepherds seeing angels and going to Bethlehem a few weeks before and may have even tried to dig into the story himself. We don't know, but we should not assume full knowledge for any of the humans in the story even after the events occurred. It's not in the text.

If he had been coming to the temple frequently he would be more likely to have known Anna, and knowing each other, they would learn each other's stories. If you put yourself in their shoes for that one moment it would have been a quiet personal confirmation for both of them. "Anna sees the same thing I do!" Or they may have spoken together for the first time immediately afterward, as Mary and Joseph went farther in for the ceremony. But that may again just be poetry, imposed by us after the fact.

Posted by Assistant Village Idiot at 9:12 AM

I figure Mary was the source. Taking your firstborn son to the Temple would be a big deal, and then having a couple of strangers come up and start prophesying about him is the sort of incident you'd not easily forget. "Who the heck _are_ you?" would elicit a lot of other details, most of which Luke would have omitted.