Behold the envelope. John Czeciuk was using this ingenious system at the first road rally I participated in. I don't know if he invented it or ran across it in another context, but I loved it. John designed the puzzles and ran the show for the early Queen City Rotary road rallies. The event still takes place annually, but we haven't gone for years. Later puzzles just weren't as good - ambiguous and trick questions. John will show up in a later post about road rally anecdotes as well. He moved to Ohio and I haven't of him in years - hope he runs across this and reads my continuing appreciation. 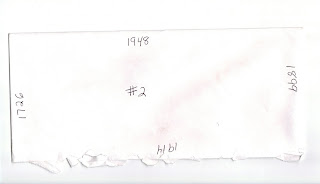 There are 8-10 of these per contest, each numbered and containing two copies of a puzzle (one for the players in the back seat, one for the front). Note that each edge has an answer written along it. These are possible answers to the question posed at the bottom of the puzzle in envelope #1. Rather like a multiple choice test. Ignoring the complications around the first and last envelopes for the moment, make sure you get what is happening here before going on. The puzzle in envelope 1 finishes with a question. Four possible answers are on the outside of envelope 2. You rip open envelope 2 along the edge with the correct answer, pulling out the next puzzle. This team has discovered (or guessed) that the correct answer is 1914. Save the envelope. It now functions as a scoring sheet at the end. I can tell how many correct answers you got simply by looking at your envelopes – I don’t need to even look at what you did on the puzzles.

It does also give you a one-in-four chance if a puzzle completely baffles you. For group comity, I recommend that the team has unanimity before resorting to this.

There is an art to creating wrong answers that seem possible. I used to take care that the possible answers not give away the destination somehow, but found it was unnecessary. In the heat of competitive puzzle-solving, nearly all teams neglect this possible extra clue, not even looking at the possible answers until they have solved the puzzle. If a team has the presence of mind to look up from its solving, notes that the possible answers on the next envelope are four buildings close together, and starts driving in that direction, so much the better for them.

First and last envelopes: The last envelope contains only a slip stating “Congratulations! Return to start.” You still have to open it along the correct edge to get credit for it. The proper edge for opening the first envelope is announced at the start. It is in fact the Go signal, insuring that people don’t cheat by opening it early and starting on the first puzzle before the others.

For each team, I pack a set of 8-10 envelopes in order into a manila envelope with the team name on the outside. With different routes for various teams, this is rather labor-intensive. Have a QA person check them for you before the night of the event. Three out four members of each team go wait in the car. I hand the manila envelope to the remaining representative of each team. To start the event, I announce which edge envelope #1 should be opened along, and they race back to their car, tearing madly at the manila envelope, then envelope #1, distributing it as they reach the car.

Next up: Scoring.
Posted by Assistant Village Idiot at 8:53 PM

Bringing back memories - have you put together any lately? Any planned in the future?

Hi,
This is the brother of John Czeciuk. How can I find out who wrote this blog? My brother John would like to get in touch with the person.

I was hoping he would guess from the context of the posts! My email is buried in my Blogger profile, but I won't make you dig for clues.