I continue to love House of Strauss. Ethan uses sports to talk about larger issues.  Sometimes these are media issues I care about less, but he is interesting nonetheless. His substack article on why the Lia Thomas movement failed is excellent. It is paywalled, but you can get the first bit free, it is narrated in his podcast, and the underlying article by Dan Wetzel he is referring to is here. The short version is that FINA, the international swimming federation, banned transgender athletes from competing against females. Other agencies are already following.

Quite suddenly, according to Wetzel, we’re about to see one of those preference cascades I often mention. A domino has tipped over and bureaucracies around the world are now unapologetically dismantling a movement so powerful that nobody at ESPN dared question it openly. Last week, it was impossible to fight. This week, it’s impossible to save. That’s one hell of a shift.(Italics mine.)

There is an exception, and Wetzel has to take the usual slam that some of the opponents were bigots and pandering Yeah, you guys are completely right but it's for the wrong reasons. But as with the lawsuits against Tavistock that I referred to a couple of weeks ago, this may be where the high point was reached and the madness began to recede.

FINA headquarters in Lausanne, Switzerland. Perfect look for what it is. 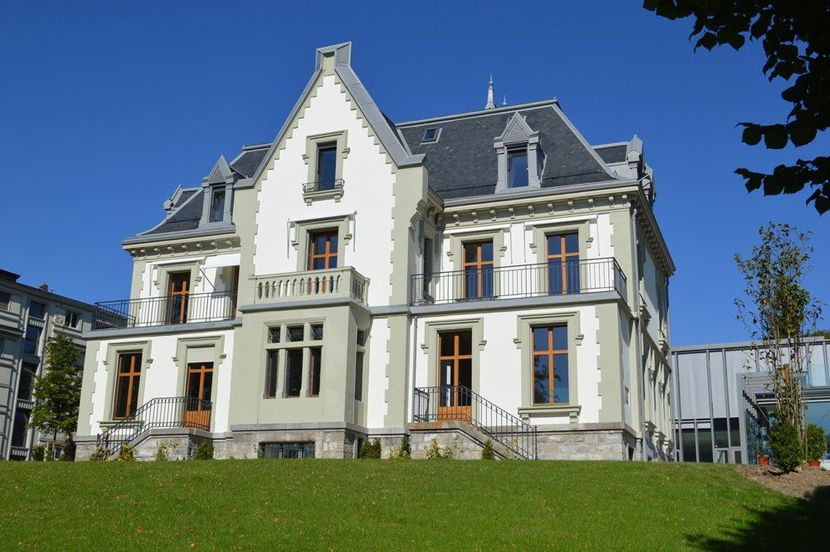 The decision stressed fairness over inclusion, and Seb Coe, the director of World Athletics that oversees track & field and other running events has been public that he comes down on the same side when the two are in conflict.

Strauss comments "So much of the Great Awokening is premised on inexorability. This was perhaps  articulated most bluntly by the narrator in Nike's  peak-cringe Euro Cup ad 'Welcome to the land of New Football.'...The commercial is built on the idea of youthful new football as this tolerant utopia that will cleanse the intolerant practices of old football. The pudgy narrator sounds like a movie villain when she announces 'You might as well join us, because no one can stop us.'" (Notice the working-class accent on the old football. No prejudice from New Football - only love.)

Strauss: "I have my own assumptions about the future, though I also understand it to be a contested property. Reality eventually wins. Maybe not immediately, hell maybe not even in our lifetime.  But eventually over time, it announces its presence against vigorous suppression efforts."

Additional bit that I picked up from Ethan on another show: Among younger listeners there is a growing number of people who listen at increased speeds. Once they have gotten used to a speaker's or a show's cadence they will speed it up, sometimes getting to 2.5x or even triple speed. There are programs that will increase the speed without making you sound like a chipmunk. This group reads less and less, relying increasingly on oral communication, and are pushing this to other media.

I read less and less every year.  Part of that is eyesight and need for light, but much of it is the ease of listening while I am walking or driving now. I haven't tried speeding it up yet, because I am not in a rush. Not usually. I may try it soon. Interestingly, it seems to encourage more thinking about things, especially thinking about what I will write, as I am out listening in a place where I can't immediately create a post. Driving while writing seems a bad idea. But I do spend more time writing than reading at this point, listening and daydreaming in between. Maybe it's not daydreaming if I am focused on topics to write.  Maybe that is simply "thinking."

I doubt we are much wired for reading, as it has only been a few centuries that people have been able to read in quantity.

re: speeding things up
I follow a number of video channels and some of them are a lot better at 1.5X or 2X playback speed. Some people have a measured cadence while speaking and this might be fine in casual conversation but when stretched out to a 20+ minute video, it's a waste of time for me. Ten minutes works great.

YouTube and Rumble both do the frequency shift very well - the resultant voices are not munchkinized.

I like normal speaking voice better, but sometimes, like Dave, I grudge the time required for a long talk (with no transcript), and bump up the speed a little.