Interesting research out of UPenn that contradicts the standard beliefs about conservatives and liberals - so you know I'm all ears on that. Twitter is still used heavily by academics, remember, for preprint discussion, and they find it very useful, whatever we might think the cultural effect of more political tweeting is.* Belief in a dangerousness of the world does not drive conservative beliefs - other beliefs affect it much more.

I had not heard of Jer Clinton, but he's an Ivy League PhD at the Positive Psychology Center, so let's take the under on how conservative he might be. I like the way he did the research though. When he noticed that his results were unexpected, even contradicting his own organisation's research, he dug deeper and asked new questions rather than trying to explain it away.

His research focuses on primals,people's most deeply-held beliefs, and in this instance there were several differences between liberals and conservatives, but one stood out. Oversimplifying, conservatives believe the world is more naturally hierarchical and it is best to accept that reality. Better things rise to the top, worse things drift to the bottom. (His explanation is longer and better.) He provides summary access to some of the paywall stuff in PDF form. 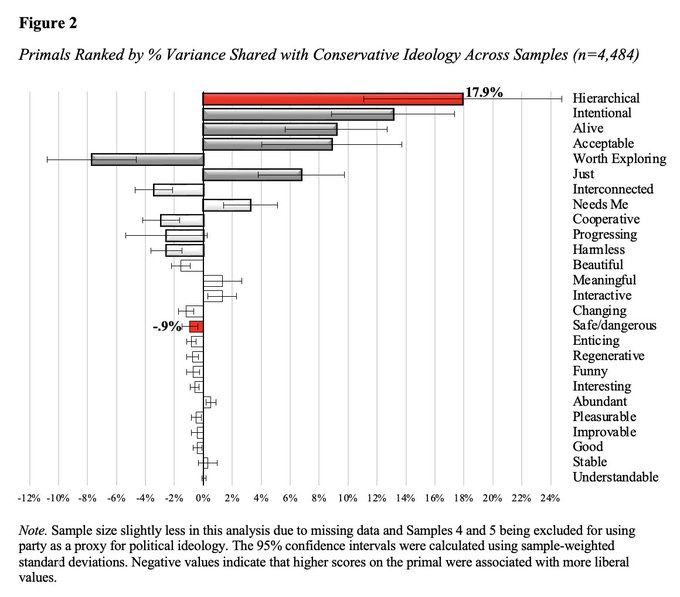 Safe/Dangerous barely registers as a difference between us. Five other things are much bigger, four in one direction.

There's a lot to poke around with on this research. There's a quiz on what your primal beliefs are, too, for those who like that sort of thing. My results are too complicated to summarise easily. I do think my answers changed over the course of the 99 questions, but as a lot of my answers were midrange I don't think it much mattered. I did have some categories that were solidly in one direction.

*This may generate more comments than the post, but I continue to believe that if Donald Trump had stayed off Twitter, he would have been reelected handily. He just enjoyed pwning people too much and discomfiting them, and too many of his supporters thought that was fun, too. As with the "conservatives" who gave us Obamacare, further co-opting of agencies, and extra small wars because they wouldn't vote for McCain and Romney, to those Trump supporters who encouraged that foolishness I say "Thanks a bunch.  Enjoy President Biden."

Posted by Assistant Village Idiot at 9:50 AM

What is meant by 'intentional' or 'acceptable' here? Whose intent? Acceptable to whom?

I think they were asking the vaguest of religious questions here, about whether the universe is meaningless or not. Or are you referring to something else? You may have to dig down.

I was hoping you had read it, as it's in an academic journal and I (sadly) no longer have institutional access to those. I'll try to drop by the local university's library sometime soon and read it on their computers.

I agree. When taking the test I was often conscious of there being very clear Christian understandings of the question that were only being captured in vague forms. That may not be unfair, as most Christians don't necessarily have precise thinking on these matters even if their beliefs in God's sovereignty and God's intentions for us and the world are pretty standard. It did make me wonder if the people designing the questions just don't know many thoughtful Christians, and so offered up a sort of theistic shorthand for "whether everything happens for a reason" or not, and whether we personally have important callings.

I did not read the study either, just the tweets and made some guesses.

I think also because he is calling them primal beliefs that he expects there will be a lot of gut rather than head in them, and that is more what he is looking for.

I looked up his website, and he has explanations of his terms there. "Harmless" turns out to be a subset of "Safe," so that believing that the world will mostly not hurt you contributes to belief in the world being safe, along with other beliefs like 'the world is pleasurable' and so forth. If you go to the same site where you can take the test, there is an account of what he thinks all the primals to be. He does admit some of them need more work.