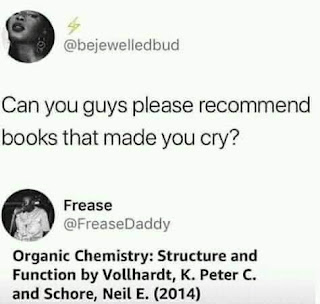 Most alarming introduction ever to appear in a physics textbook:

~States of Matter by Goodstein

That does sound discouraging

I don't know about organic chemistry, but I've been consistently appalled by the proportion of people who express frustration at the difficulty of high school- and college-level algebra.

To learn it, to understand it, or to intuit it? Would high schools really offer a course that only 15% of people can handle?

Sure. I went to a city high school at which only about 15% took College Algebra II. There was also General Algebra II, but I think it was only every other year, as few took it. I think these days students who can't really deal with that abstraction are pushed into it anyway, and if they put forward effort the school isn't going to fail them, but that is still only 30% and that is very much the end of math for lots of them.

It astounds me that someone can be intelligent enough to, for instance, sign a check or drive a car, and still have even the slightest difficulty with Algebra II.

Your brain is not like other brains, Ganzir. We all have a tendency to think that we and our circle are "pretty much" average, or maybe just a bit better. If you have a try at some tutoring of poor kids you'll see what I mean.

I think I see what you're getting at: the apex fallacy. The same phenomenon that leads rich people to say money doesn't make you happy. The same psychological projection which results in male fashion models dispensing dating advice to the effect of, "just ask for her number bro". It's probably impossible to express this sentiment without sounding pretentious, but I think my thought processes are so far above the level of most people's that I can't locate the boundaries between what I can do that they can and what I can do. Everything looks tiny when viewed from orbit.

But it still astounds me.

The usual best cure is to start assuming you are smarter than everyone, at which point God will send you a faster gun who makes you look very bad indeed, especially as you were being conceited about it. It works on me, anyway, at least for a while.

I was in the same Math III class with the President of our Junior class. She wasn't brilliant, but was a conscientious student. Her parents had postgraduate degrees. I'd guess she had a B (3.0) average, at a time when A's and B's were earned, not given out for participation points.

I had no problem with (New) Math III, as inductive proofs in Math III were just a continuation of geometry proofs in Math II and Math I proofs about commutative principles etc. Before New Math, I was indifferent to math. After New Math,I loved math.

She wrote in my yearbook: "No more Math misery!" That gave me an indication that New Math (UICSM at my high school), with its proofs from the beginning of Math I, wasn't for everyone.

Max Beberman developed UICSM at the lab school of the University of Illinois, which may have given him an unrealistic expectation that most students could handle UICSM. Not everyone is a faculty brat.)

So claiming that only 15% of the population can handle Algebra II doesn't sound outrageous.