When I was on my Rail Trail walk along the Piscatasquog, I saw the Fish & Game Dive Team trailer and thought. "I hope this is a training exercise." 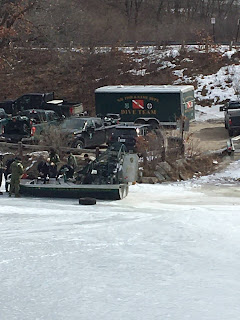 It's not.  A bystander told me that someone who lives along the river was out on his four-wheeler and has been missing since last night. There is a hole in the ice near the boundary between Manchester and Goffstown. 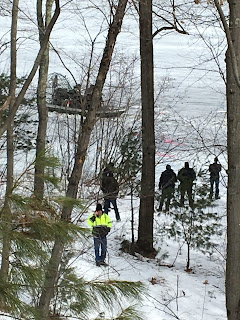 The hole in the ice is right in front of that air boat in the second picture, already freezing over. Another bystander told me he has known the guy about twenty years, and looked about forty himself, so that would be my guess for age. It's not confirmed that he's under there, but no one doubts it at this point.

Posted by Assistant Village Idiot at 11:14 AM

As a child I once -- having been reliably informed by people I trusted that the ice on the river was not yet thick-enough for skating -- tried in vain to communicate this fact to some other children who were having great fun playing hockey on the river.

I recall taking lots of abuse from them after I shouted my warning. I was a scaredy-cat, I wanted to impose lack-of-fun on others only because I'd been forbidden from having fun myself, "We don't perceive any danger, Q.E.D.: the danger you speak-of is imaginary".

I think of this minor event in my life surprisingly frequently, most often when I see people within a church promoting something that's traditionally considered within Christian teaching to be 'sin'. I find it somewhat ironic that when I observe others expressing concern for the destiny of someone's immortal soul, they are branded 'hateful'; yet in this area and many others I still haven't worked out how to effectively convey moral hazard to people who are determined not to see it. We want our fun, and anyone against fun certainly can't have anything but hateful motive.

(In the original event one fellow did end up getting wetted up to the knee, but was moved off quickly to a warm place before hypothermia or frostbite could set in.)

CS Lewis wrote about this in "Miserable Offenders," http://anglicanhistory.org/usa/advent/misoff.html, based on a phrase that some objected to in the Confession, because they didn't feel miserable. He described it as the feeling one would have watch a train from up on a mountain headed for a bridge that was out. Whether they felt miserable or not would have nothing to do with it.