I quit smoking ten years ago, on the first day of Lent.  I had been feeling anxious for some reason, and recognising that tobacco was a stimulant, resolved to stop for a day to see if that helped.  In retrospect, caffeine would have been a better nomination (addictions are complicated in terms of anxiety), but when one is anxious, one gets a little random. After 72 hours I figured out that the tobacco wasn't the issue, but I had two things that kept me going.  I knew that the first 96 hours were the worst and figured I had already paid most of the cost. Secondly, I had already resolved to seriously reduce carbs for Lent and had done that, and thought I could game the Lenten system a bit by holding the two fasts simultaneously and bail on one and still have the other to make it through to Easter morning if I got desperate. So I concluded I had quit rather by accident. I doubt I had thought much about it even a week before, and did not agonise with guilt over it as many others did.  I loved smoking. 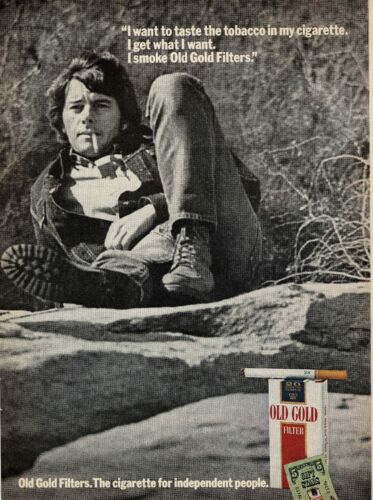 I started in 1969 just after my 16th birthday. Over the years I had quit twice, once for two years and once for six months. I don't remember the times I quit for a day or two. I averaged a few less than a pack a day and once calculated it out to 35 pack-years, or whatever the measure would be called. The first packs I bought were Marlboros for $0.31 but by the end of high school I wanted to be different and switched to Old Golds. They were all the same, really, like American lager beers. Lights just had some holes punched in the filters, and smokers automatically either held the cigarette just there or moved their lips up to cover. Ultralights - more holes. Menthols were a change, but were all like each other, and similar things might be said about nonfilters. My Dad smoked two packs of Lucky Strikes most of his life, though he had to hide in the garage to do that after his bypass surgery. My grandmother smoked Raleighs for the coupons, and I forget what my mother smoked. I think she experimented a lot.

I smoked hard, or so I am told. People thought I must also be a marijuana smoker I put so much draw onto the cig. I never thought about it.

I have only rarely missed them, and then more the appearance, seeing a person lighting one up in the dark in his car in winter or a guy coming out onto a promontory to admire the view. I did miss the camaraderie for a while.  That increased among smokers as they became increasingly stigmatised. The brotherhood transcended age, sex, race, and income without a thought.  Hail fellow, well met. Leonard Cohen took up smoking again after 35 years at the age of eighty when he was already terminal, and I completely understand that. But the smell became unattractive very quickly - within two weeks, maybe.

Update:  My father's second wife says she found the last of his hidden cigarettes last year - she thinks.  He died in 2002.

It is fascinating to me that it has been that long. It is such a part of what I remember of you growing up, but for the girls it’s a completely alien idea that Pops would smoke.

Been a two pack a day smoker for 44 years. I need to quit, but the more I think about it, the more I smoke. I've had nicknames over the years related to my smoking. Buddies in the military used to call me RJ after R J Reynolds and later when working as a groundskeeper at a women's college, coworkers called me "Smoke Daddy."

My late brother quit a couple of years before he died and he would say...Man, sometimes I just want to snatch a cigarette out of someone's mouth and smoke it. Or he'd say...Man, I could smoke one twenty feet long right now.

Us smokers are considered Pariahs now and it's harder and harder to find places to smoke out in public.

Dad gave up smoking the day I was born, so he told me. I never saw him smoke, nor found any hidden cigarettes, so I believe it.

I smoked cigars in Iraq, because General Order #1 forbade all other modes of fun. It was the only thing we could do together that was different. It was kind of fun, but I gave it up after coming back. A friend gave me a pipe, and I tried to enjoy that -- smoke rings and the like, a la Tolkien -- but it wasn't really for me either. Like you, I don't like the smell or taste of the stuff after a short while.

The cigarette on top of the pack looks a little like a torii gate.