Transition to Farming In Europe

Just so you know going in, whenever reading up on the topic.  There are ritual incantations by all the sources that depend entirely on PC money - National Geographic, Smithsonian - that must be made whenever discussing European genetics.  They must recite that there are no pure European races dating back endlessly with continuous presence until the present day.  Nay, nay.  Nazis, thought that, and you don't want to be like them.  Lots of other people thought so, too, and they were also racist.  All of your recent European ancestors were likely racist, and good people don't even come close to thinking like that anymore. Once you understand that this is part of their common religion and they have to say this at the opening of every academic exercise (sort of like everyone saying the Pledge of Allegiance at town meeting, or singing "The Star-Spangled Banner" at sporting events) it becomes more endurable.  It is comforting to them, making the appropriate obeisance before proceeding.  Because it's a new religion, they are still working things out. They see heretics everywhere.

Then they go on to explain to you that until very recently, the major sources for European genetics do come from three waves which stabilised thousands of years ago.  But don't get any idea that this means anything.  Those were really, really different groups, you know, and there were groups within groups, like Celtic and Slavic tribes both being Indo-European, and groups within those groups. So no one is pure. Got that, you potentially fascist reader?

The first group in were hunter-gatherers 45,000 years ago. Unsurprising, as there was nothing but h-g's at that point, no farmers anywhere. They outcompeted but did interbreed some with Neandertals, possibly because they were meaner, or maybe smarter. Glaciers came and went and areas were depopulated and repopulated. Who they were has been murky, but we are starting to get some initial narrative. It's complicated, but a group we call European Hunter-Gatherers, especially West Hunter Gatherers (WHG) became the temporary Indigenous Peoples of their day. Europeans still have lots of that ancestry, as you can note from the Distribution maps of European Admixture I linked to a couple of days ago.

Y-chromosomes tend to record major turnover events, where the males of one group seriously outcompete the males of another enough to establish that lineage.  So massacres and genocides are there, but so is multicentury 1%-per-generation dominance.  Sometimes the females (and children) were massacred, but more often they were taken as wives, concubines, or slaves, so there was not a complete turnover. Yet because Y-haplogroups are only a single ancestral line and exclusively on the sex chromosome, one gets a more complete picture from the autosomal - that is, all the other chromosomes - DNA.

So here come the Early European Farmers (EEF) out of the eastern Mediterranean about 8,000 y/a, with all their fancy wheat and barley, gradually overwhelming the WHG's, starting in Turkey and the Balkans. They came further by two routes, up the Danube through central Europe (what we now call the LBK - or Linear Band Keramik culture) and an Atlantic route up as far as France and eventually Britain and Ireland (eventually the Atlantic Megalithic Culture). It took over a thousand years for them to converge and have to compete with each other rather than only the locals, but this eventually happened in northern France.

All that as background.  Here is what I really wanted to tell you.

The EEF's and WHG's coexisted for centuries, even millennia. They weren't competing for the same land and resources, and may not have interacted much. The did interbreed, but not so very much given the time span.  The h-g's liked swampy areas abundant with fish and waterfowl, the farmers needed loess soil for crops. The latter did not spread evenly and gradually across the landscape, but in hops to new highly-fertile areas. They would not be numerous upon arrival and would pick spots not much used by the current inhabitants. Their population would grow only gradually at first, and when they figured out maximal exploitation of each niche (likely a lot of trial-and-error) the explosive population growth could not easily be managed once they had taken up all the good land in the area. We think they did expand their settlements somewhat, but mostly, they headed up the coast or up the river a couple of hundred miles until they found another highly fertile spot. Whatever hunter-gatherers there were could be avoided.

There would be competition for fresh water, and areas for grazing reindeer or aurochs would have some similarity to areas good for domesticated animals. There was violence and direct competition. But more usually, they didn't want each other's lives.  Hunter gatherers persisted for millennia, though driven into progressively less-desirable land. Each took a few tricks from the other over time - the farmers had good pottery, which the h-g's traded for and imitated; simpler hunting and fishing techniques might have to be resorted to in hard times. Even now, commercial fishing is a kind of hunting-gathering strategy, just more sophisticated, and hunting to at least supplement foodstuffs was not only sport but survival for some until recently. But they largely stuck to their ancestral cultural strategies.

There have been arguments in anthropology for decades about whether the ideas of crops and domestication spread or the farmers themselves spread, but that has been largely resolved. In the "pots versus people" dispute, it's both, but mostly the people. A little interbreeding, a little borrowing, a lot of climate and resource variation where one strategy is better than the other for years or even decades, and you get a hybrid culture. But this is never complete, as fishermen still fish and shepherds still herd even now. In Europe, the EEF's eventually came to dominate. There were indeed descended from Aegean farmers (Greece, Turkey) much more than from locals. People don't say to themselves "well, the reindeer catch was bad these last two years, I think I'll give this farming thing a whirl. Where can I get land?"

The cultures hybridised enough to build Stonehenge and the like, just in time for the third wave to come in and push them around. Y-haplogroups R1a and R1b.

Any number of possible pictures to illustrate, but this is good; This would be the endpoint of the period I have just written about, before the Yamnaya really get untracked taking over Europe. From this article. 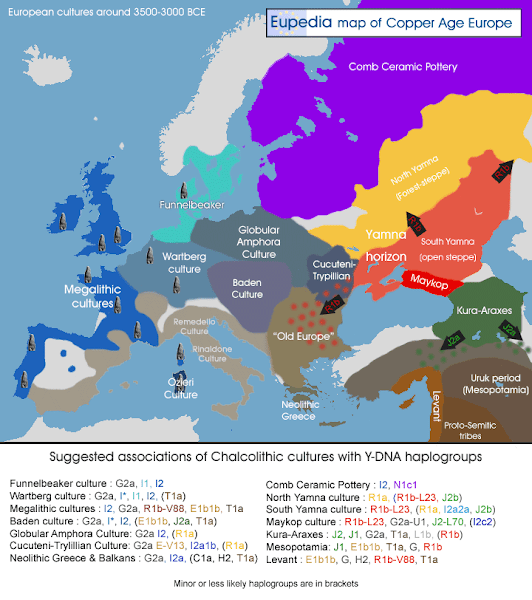 (I am hitting "publish" in haste, heading out the door for church.  If you find typos or incomplete sentences - or parts that are not clear - let me know in the comments.)

Posted by Assistant Village Idiot at 10:06 AM

The image does not appear

Trying again. Including the source if it still doesn't work.

I'm reading "The Horse, the Wheel, and Language," talking about this same thing, how hunter-gatherers and farmers can co-exist near each other for very long periods without adopting each other's lifestyles. The author argues that it's hard to make a transition between the hunter-gatherer core belief in immediate sharing to the farmer's core belief in denying even oneself and one's children the ability to eat the breeding stock or the feed corn, let alone sharing them with hungry neighbors. The farmers had to learn to prize a kind of deferred gratification and something like hoarding that was deeply inimical to hunter gatherers.

So, as you say, it wasn't too hard to transfer discrete things like metal tools or pottery or ornaments, but the whole cultural package didn't transfer easily except to descendants. He also argues that design fads can sweep across populations, but it's much rarer for them to take up new production technology. So a new pottery design may seize the public imagination, but they'll keep firing the pots the old way.

I guess the exception is when the old way leads to starvation or loss in war.

Soooooooooooooo, we're ALL mongrels, and we enclose multitudes. Works for me. I'm cool with that. I got no horse, high, low, or in-between, to ride. Well, I used to have a motorcycle.

The farmer and the cowboy should be friends

@ Texan99 - loved that book. I discussed it almost two years ago. https://assistantvillageidiot.blogspot.com/2019/01/deciphering-ancestors.html

Just so you know, the podcasts I listen to, which interview top-flight experts in the field, mention this book fairly often. It's highly respected since it came out.