We went far enough up that I could cross it jumping from rock to rock.  My wife waded the ten feet or so. It's about two miles across at its mouth in New Haven 400 miles south. 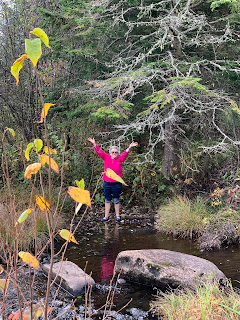 We had consulted the NH Foliage Tracker, which was entirely deceiving.  As we headed north I kept thinking it was all very disappointing this year, despite some individual moments of beauty, but looked forward to seeing peak foliage in Pittsburg, then waiting for it to work its way down after we got home. But when we got there it was worse than here.  We were arriving in late afternoon and it was a grey day, so I looked forward to morning. It took a bit to realise that the leaves were not merely "not spectacular," but "not there."  There were off the trees a week ago because of the drought.  We left an area that was near peak to visit one long past peak.

I paused a moment and concluded that the foliage tracker is an average, not a record of this year.  Because of the drought, the leaves started changing a full three weeks earlier this year.  Fortunately, leaves were not our primary focus.  And we did get to see good foliage the first two ours of our meandering 8 hours up and last two of our 9 hours back. (A straight shot driving would be only about 3.5 hours, but we stopped and looked at many things along the way. Many, many things, including 12 covered bridges and 20 historical markers, and equal that number of roads we had never been on.) We did get to see a moose, plus some Ruffed Grouse and Snow Buntings. We passed Errol International Airport, which looks sketchy. If they'd had any dramatic incidents I would have heard about it, though, so I guess it must be okay.

All three restaurants in the North Country were disappointing, including the Littleton Diner, famous for its authenticity among diner fans.  They do still serve liver and onions up there, bacon optional, and I considered it twice, but decided that day was past.* Down in this part of the state we kid about how life is different "Above the Notch," which seems to mean both Crawford and Franconia, which are at about the same latitude.  Above the Notch and Proud of it, goes the phrase. But where we were they don't seem to mention any notches, not even famous Dixville Notch (a scenic treat, BTW) which is sixty miles farther north than the others.  When we got above the big notches on the way up, we were only halfway there.  I forget how much more of NH there is above Mt Washington. "What notch?" they might say. It's Arctic Cats, ATV's and fly-fishing up there, not skiing. Poor areas, highly dependent on tourism.

*Chicken livers wrapped in bacon are still barely on my list, though I haven't had them for more than twenty years now.
Posted by Assistant Village Idiot at 9:09 PM