In the summer of 2005 we all went to Romania. Chris and John-Adrian went back; Tracy and I went again; Ben, Jonathan, and Heidi went for the first time. This was just before I started this blog, so I haven't written about it much.

We didn't go as a pack. Ben was there all summer, working at the orphanage. It was all younger children by then, mostly girls, and he was temporary Daddy to some outrageous number of children. Some of the girls were quite forceful about calling him Daddy. Or Mommy. Or Sir Mommy. Chris and John-Adrian also spent some of their time volunteering at the orphanage they came from, though they were there a shorter time. Not as much work as they were expected to do, but some.

The other four of us did very little at Casa Iosef, though we helped out some. We were doing the tourist bit in Romania and Hungary.

I had hinted that the boys had kept in touch with their younger sister left behind. They did, and located an older brother they had lost contact with for years as well. Cata had left the family home at 14 because of the abuse. I don't know what miseries he endured in the interim, but I am sure it wasn't good. But he has weathered the storm: a gentle young man who was then engaged to Crina, now his wife. They work in Tromso, Norway most of the year. The boys skype and facebook them.

So here's the full batch in Oradea that summer, plus a few Romanian friends. This is scanned instead of downloaded for annoying computer reasons. Good enough.

We did a few days of touristy stuff in Budapest first, Ben having saved up time off at the orphanage to be with us. The touristy pictures I posted in April 2006 seem to be no longer stored on this site. Ben has some. I'll do some soon. But here's one of Jonathan and Heidi, anyway. See how fresh and relaxed they looked before they had children? 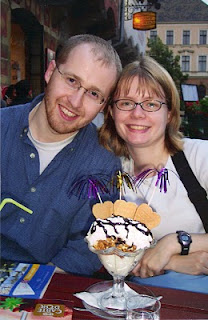 Hungarians do dessert very well, BTW. The communists may have ruined the architecture, but the desserts remained intact.

Ben has posts from that summer on his site, including many pictures of the children at Casa Iosef. His humor and sensitivity both show out. Also, you get his actual side of things, not what I tell you his side is. Okay, that's lots of cute pictures of kids, but Ben's gotten enough space in this post already.

We took the boys to Derna, the village the boys had grown up in before going to the orphanage. It is near both Sarbi and Spinus that I visited in 2001 (Part Five), but is where the families have their strongest roots. Semi-distant relatives still occupy the house they lived in. On the way there John-Adrian, the one who has never talked about those years after that first day we talked, was a sudden library of information: That fountain has water that heals people, they come from everywhere. That is where we found the dog that had been hung for killing chickens one morning. My grandmother used to live there. We were viewed suspiciously as we arrived in the village, as Tracy and I, at least, clearly did not belong there. The boys showed us around. This is where we went to school. There is an overgrown cemetery behind there. They were a bit shy about talking to the people gathering to look as we came to the house they had lived in. Ridiculously, I had to break the ice with my poor Romanian. "Cauta Familia Parcalab?" (I seek the Parcalab family). Then the boys launched into discussion with the gathered women. Several remembered them, though one though J-A must be Cata. 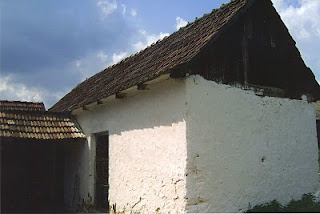 Here is the barn where Chris would hide when his father was drunk. 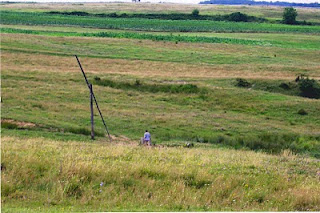 This is J-A in the field where they were shepherds when they were 6-8 years old (to keep their father in palinka and cigars). The sticks are the well to water the goats or sheep. They boys wandered in the field, separately. They might stay together now.

We drove out before sundown, neither boy saying much. Nor have they since, though they don't avoid it when we bring it up.

Remember how I mentioned that house colors are brighter now that the Revolution and freedom have begun to sink in? I mean...bright. 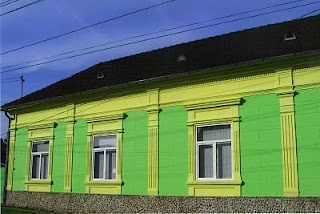