From the first trip to Romania, in 1998. The woman is 94, living alone. We were bringing her some medicine. Tough lady.

One of my team members with two of the abandoned babies. The one on the left, Madelin, has been adopted to France. I mentioned him in Part Three. I don't know about the other.

Tracy in 1999 with Ioanna, her favorite of the babies.

Chris and John-Adrian in 1999, before we had any idea of adopting anyone. 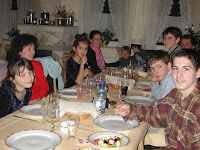 The older children from the orphanage being taken out to dinner in early 2001. John-Adrian is front right, Chris's head is popping up behind. They knew someone was trying to adopt them, but not who. Though John-Adrian insists he had guessed.

Everyone in the photo is now adopted to America, though the girl with her hand to her mouth did not get out until the brief window a few years later. She is the one who is now cousin in Michigan to her best friend from Romania.

Remetea, a Hungarian village in Romania where the boys brought me when I went to see them as their father for the first time. There was a family who had been good to them they wanted to introduce me to.

Touristy photo from Budapest from that trip. Notice what the Hungarians have done with all that Soviet art they had hanging around: instead of destroying it they just set it up outside the city, basically in somebody's yard. A very cool statement. To get size perspective, notice that I am clutching the ankle.

Saying goodbye to their sister Ina when we came to pick them up. She'll show up in a later post.

Hanging out with a lion at Castle Peles. Keith Sykes is on the left, Luke Sykes, who got affectionately grabbed about five seconds later, is on the right.

All of us back home a few days after bringing them to America. Tracy took the picture and is not visible. From left my stepfather; then Ben a high-school junior; Jonathan and Heidi - he had just graduated from Asbury, she had a year to go; Chris, finishing sixth grade; me; John-Adrian, end of eighth grade.
Posted by Assistant Village Idiot at 5:35 PM

The babies, so beautiful... I cry.

Watch out then. The return in 2005 has cuter babies. The story gets both happier and sadder. Looking over the photos in preparation for the post I was tearing up myself.

So glad to see the pictures. Tho so sad seeing all those kids and wondering about the ones who didn't find families.

And it helped give some perspective today after a fairly harrowing day coping with one of our kid's issues (major).

Auden was the one who wrote "we must love one another or die" But those poor babies. Your two JA and C were blessed to join your family.

Weren't the top two pictures in a movie about Kazakhstan?

Jonathan and Ben, I swear lelia's comment was not a set-up.

The pictures are in Romania, 1998. But Romania was where Borat, supposedly set in Kazakhstan, was actually filmed, in a gypsy village called Glod. The top picture is not in a gypsy village, but in a standard peasant village, Giulesti. The second picture is either Budureasa or Pietroasa, I don't remember which.

Actual Kazakhs look more Asian/Mongolian, though so many people were moved around in internal exile in the USSR that appearance is reportedly unpredictable. I don't think there are Rom in Kazakhstan, though.