Or
The Assistant Village Idiot Finds a Woozle.

I have not been up over 4000 feet for some time. In fact, I have not even been over 3000 feet since the late 90's when I quit on a 4K outside of Waterville Valley.  When I climbed my first 4000-footer in 1977, I weighed 90 lbs less.  But, after quitting smoking a year ago and having climbed Mt. Uncanoonuc many times recently, I thought I might be ready to try again.  A practice hike to Bridal Veil was easier than it had been in years, so I gave Mt. Waumbeck a try.

As with many NH mountains, you can't actually climb Mt. Waumbeck.  You have to climb a neighboring mountain and then walk the ridge between.  Mt. Starr King comes in at 3907' from the south, and you schlep down to the col and back up.  The trail guides all mention that this is one of the easiest 4000-footers of the 48.  It grieves me that this is likely true, as the 7.2 mile round-trip with about 2800 foot combined elevation gain is about my current limit.

Steepness matters.  North Uncanoonuc, though a much smaller mountain with shorter trails, has steeper sections than anything on Starr King. Walking 10 miles on lesser inclines would have been less beneficial training than the short and steep I've been doing.  Most of the elevation gain is in the first 1.4 miles, which took a lot out of my legs.  The remainder is milder traverse over bad, slippery trail - hard on ankles, knees, and hips but not requiring much calf and thigh.

I was looking forward to the 3000' mark as much as the summits.  In NH, that's right about the place you can smell balsam, and I have always found that invigorating.  Balsam grows at lower elevations, of course, but achieves some dominance at three thousand.  Also at 3000' I started seeing deer droppings, lots of them.  It makes sense, even up high - all they need are young plants and a place to hide.

They could be moose droppings, I thought, which look similar.  But moose prefer swampy areas.

Or.  I wonder what bear droppings look like?  And what kind of cats do they have up here, anyway - and what does their spoor look like?  Not like this, those are deer droppings.  I'm pretty sure of that.  Pretty sure.  Okay, what is it you are supposed to do if attacked by a bear or a mountain lion again?  Feed a cold and starve a fever? Irrelevantly, I thought of Sir Pellinore and the Questin' Beast.  "Would you like to see her fewmets?" It's not helping, and makes me lose count of my steps.

Oh yes, it's that OCD thing again.  I count my steps up, sometimes down. A little more than 7500 to the top of Starr King.  (It's named for a 19th C Unitarian and Universalist minister who moved to California. He wrote a book about the White Mountains after vacationing there.  After the Presidentials and the Indian names, it's pretty random up here.)  Crossing over to Waumbeck, there were a ridiculous number of droppings.  More than one animal, clearly.  Look Piglet!  Another animal has joined the other two!  Now there are two, as it were, Woozles and one, as it were, Wizzles, or...

Damn, I'm really hoping it's not bears.  Make noise.  Yep, got that.  Don't run uphill.  Running anywhere is right out at present. Does this sound unnecessarily anxious to the reader?  It's my whole life.  I have imagined terrible deaths since I was a child.  Going into unfamiliar situations only intensifies that slightly.  Death takes us all by surprise, of course, but I will be less shocked than most.  I have been expecting it as long as I can remember.  Enraged Hutsul Dancers. Mmh.  Should have been ready for that. Secondary Trichinosis. Yeah, I was just wondering last week if that were possible.  Would you expect that this would at least reduce my worry about more normal deaths, like getting blown off the top of a skyscraper or not having my parachute open?*  Not at all.  Those completely give me the creeps.

Yet here I am, finally at the second summit, and very badly in need of a nap. I'm risking that, even if there are multiple bears, but I'm taking the minor precaution of putting my knapsack with the food up and away.  Roll up the sweater for a pillow, find a little elevation for the head.  The sun has inexplicably come out after morning rain, so I put the sunglasses and hood over my eyes.  Lovely, balsamy, drifting off to sleep.

It was then I was attacked by this, right under my chin. 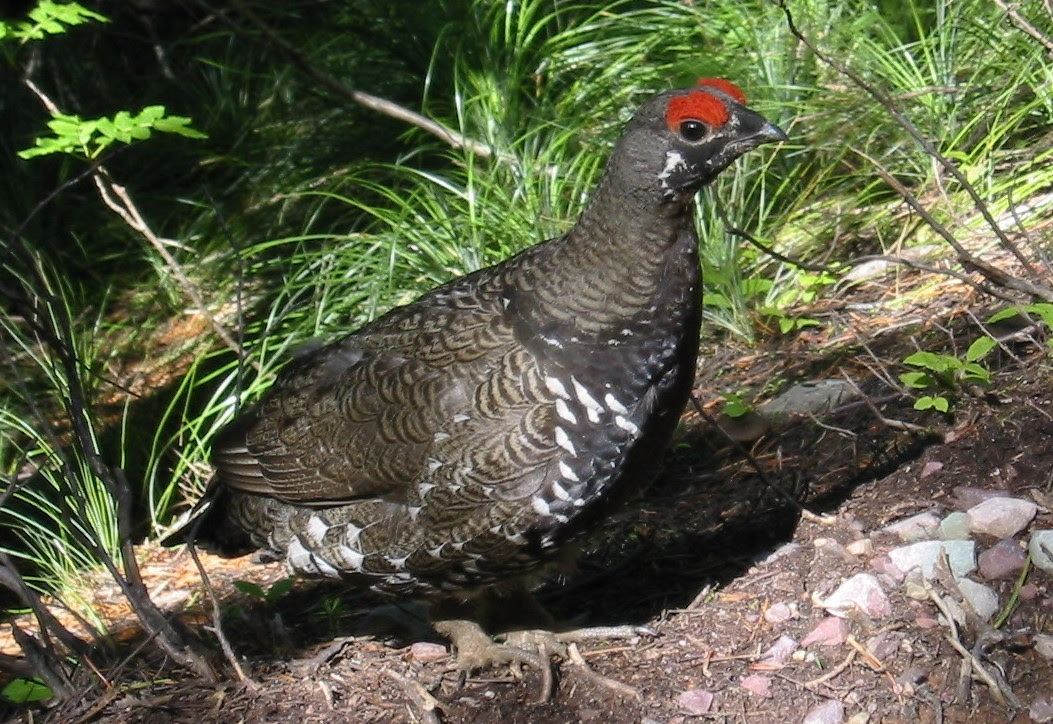 You would think that I, if anyone, would be prepared for such an event, as my son Trespassers W was attacked by a quail in the early 90's under similar circumstances.  It still figures strongly in family lore. But I was thinking about bears and large cats, and as I rolled and leaped up in one motion, it was with the expectation that This Is Death, attacked by something with serious tooth and claw, the only remaining question being whether it was going to happen quickly or hurt a lot.

This unexplainable chicken-on-a-mountain was hopping down the trail.  I get it now, but at the time, I had the fleeting thought that this bird was attempting to lure me toward the bear/cat/space alien/Woozle.  That bird is going to be a frantic this spring, as it has nested in the one place in the area people are most likely to stop.  I couldn't be happier.  I hope the bastard is a nervous wreck by July.

During the completely boring and soul-numbing descent, abusing feet, knees, and ankles, I took my eyes off the trail for a moment to find my carrots.  Looking back, I just missed stepping on a snake.  The thinking is, they are more scared of you than you them.  Not bloody likely.  How many books has that snake read about terrible deaths humans can inflict on it, eh?  How many times has he imagined helpless destruction? Two seconds and he's carefree again.

*You think those are unlikely, seeing as the precursor events are rather obvious and avoidable?  Don't be silly.  People find themselves atop tall buildings for no apparent reason all the time. Passengers who have to make their first jump from a plane going down happens so often they don't even mention it on the news anymore.  It's an absurdist, Douglas Adams world.
Posted by Assistant Village Idiot at 9:52 PM

Have you ever had a goose try to chase you away from its goslings?

Anyway, glad to hear you survived.

I laughed out loud at this, my podmate probably thinks I'm crazy (-ier?) now. I've been badgered by geese, but never a grouse!

It's funny what different places call a "mountain," isn't it? 4000ft around here is a big hill...

I should be happy to stroll with you some time. I can watch your back so you can stop worrying about dying and focus on not losing count of your steps.