Only On The Map - Last Stop: Noone Falls

I told you at the beginning that there would be some Scot-Irish (don't start on me now) settlement important in SW New Hampsha, but actual history hasn't borne this out as we've touched down in these places. Finally, here they are. 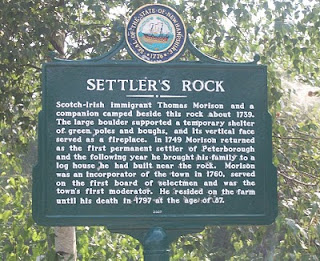 Noone is one of the map-localities that actually must have had a village at one time. There's the old mill, now offices - mostly of non-profits. 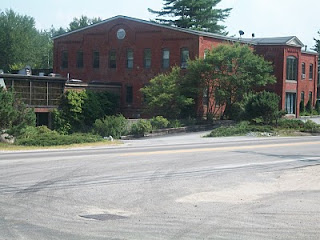 Then there's the addition to the mill, now made into shops, tending toward the artsy and New Age. 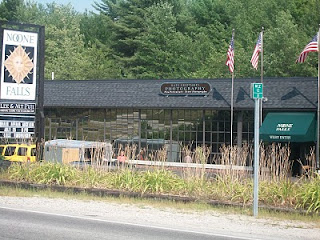 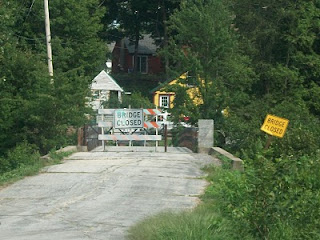 Across from this was Our Town something-or-other. Printing shop, maybe. That's how you know you're in Peterborough, because everything is named Our Town Realty or Our Town Laundry, or Our Town Cafe, or whatever. Rather like everything in San Antonio being named "Alamo." Because Peterborough claims to be the basis for the town of Grover's Corners that Thornton Wilder set the play in. He wrote it at the MacDowell Colony north of Peterborough, an artists' retreat, and the particulars of the play are very small-town NH.

Well, every place has got to have something. And as one of Wilder's themes in the play is seeing the universal in the particular, I guess it's a good thing that someone commemorates it.

All high schools and most colleges do "Our Town" at some point, sometimes once a decade or so. But I liked "The Skin of Our Teeth" much better. We did a good deal of reading aloud to our first two sons, as I recently mentioned, but we also did plays aloud as a family, divvying up the multiple parts. I don't think Ben was old enough to participate in that one - Jonathan was about 9. He liked the dinosaurs living next door to the people, and caught many of the Genesis references. "Henry, put down that rock! You know what happened last time!" after learning that Henry Antrobus's original name was Cain.

Seeing the universal in the particular was part of that show as well, and so is a nice fit for the end of this series. If you've never read "The Skin Of Our Teeth," BTW, I highly recommend it.
Posted by Assistant Village Idiot at 10:11 PM