Only On The Map - Hadley & Drury

One of my maps showed a Quaker meeting house in Hadley, the village right on the border between Jaffrey and Peterborough. I knew from my NH history that Amos Fortune was buried at the Old Meeting House Cemetery in Jaffrey. You may have been made to read the book Amos Fortune, Free Man as a child, as it was a Newbery winner in the 1950's. We are big on Newbery's from the 1950's in my family (I own the first copy of this), but even more to the point, my wife is a children's librarian who has taught NH history for 20 years. In fourth grade, my older sons were required to read the book and were brought out to Jaffrey to see where the freed slave was buried. I think one of the Romanians was even dragged out there even though they arrived here well beyond fourth grade. Because it's NH history, dammit, and part of your heritage. Which seems insane, but if you live in our family makes perfect sense. Willa Cather is also buried there.

But I was pretty darn sure there were no Quakers figuring prominently in that story. They were sparse in this area until well into the 1800's. Also, meeting houses on the edge of town seldom have historic significance, so I concluded - rightly, this time, it turns out - that the Meeting House and the Quaker meeting house were two different items. Still, I expected a charming historical building of some sort. Ahem. 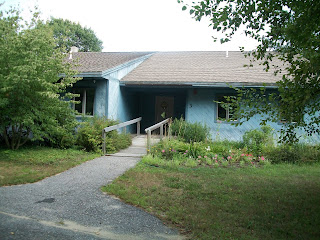 My initial disappointment turned to approval as I drove on. New Hampshire has the lowest church attendance of any state - a European 4% each week - and we have plenty of churches as historic items, but not so many thriving. We are starting to have "still in use" show up in descriptions of historic churches here, as if that were some quaint curiosity, like "working farm." So good on the Society of Friends for persevering, then.

Another mile or so up Route 202 - a historic route from Maine to Deleware dating from the 20's - is Drury. This is back to the other NH, not the one they put on postcards, again. To us, it's all part of a whole. That the Robert Frost Farm in Derry is directly across from a mobile home park doesn't strike us as especially strange. Frost came back here to take care of his mother's farm, and took a job as a teacher at Pinkerton Academy (my grandfather was one of his students) because he needed the money. There was a lot less of the two intellectual classes of people here, one which gave themselves over to works of word and art and one which had no use for such things, that you find in other places. Massachusetts calls us "Cow Hampshire" and sniffs, but we long had the highest SAT's and lowest dropout rates in the nation, except when similar neighbors Maine and Vermont would give us a run for it. The "other" New Hampshire isn't really other to us.

Here is the Pizza Barn in Drury. Notice the bulletin board in the center, where people tack up notices advertising their upcoming suppers and clubs, or their tree-cutting services or music lessons. There's often a fringe of phone numbers along the bottom, so you can rip one off to take with you. The right half of the building is a little apartment, and best as I could tell, not the owner of the Pizza Barn's apartment. People scramble a bit and have more than one income stream in these parts. 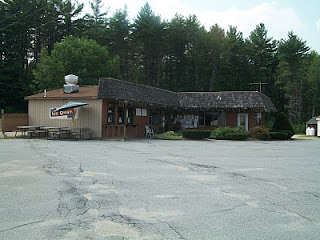 Such as, if you choose to notice, the U-Haul franchise as a side business for the tire place across the road. One of the guys who works there does auto detailing as well - he's got a business card for it posted on the bulletin board at the Pizza Barn. 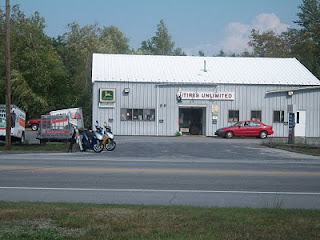 Posted by Assistant Village Idiot at 8:19 AM

Willa Cather buried in NH! Whooda thunk it? I wouldn't have. Willa Cather is one of my favorite authors. In reading My Antonia, I got the impression, rare in a book, that if she wasn't writing about MY PEOPLE, she was writing about people I knew. It wasn't just that a great-grandmother of mine died on a homestead in Nebraska. Cather had an ear for the spoken language. She used a word that I have heard only my grandmother and her friends use. She caught Slavic immigrant phrasing in Nebraska that I heard growing up in NE.

And 202 runs through my sister-in-law's hometown.