There were 9 (or more) rules the animator Jones set himself for the coyote and Road Runner cartoon. As these were sometimes broken, especially in the earlier episodes, it is likely that these were described only in retrospect, as he learned about his characters and what made them funny. One notable exception is that Wile E. Coyote does get hit by trucks or trains a fair bit. 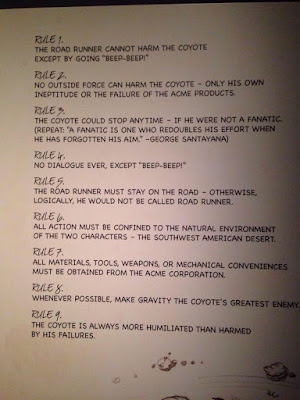 Many (MANY) years ago, I lived in New Mexico. Our governor, "The Honorable" David "Dave" Cargo, had a stuffed road runner on his desk. There began a foofurraw about whether the bird should be posed with the tail UP or tail flat (horizontal). Dave left, and New Mexico was calm(er). I later moved to Tucson, and by golly, Tucson had road runners too. IIRC, the ones with their heads UP also had their tails UP, and when running, heads and tails were horizontal.

I know they violated Rule 4 at least twice, once with the Coyote breaking the glass wall, and once with a couple of kids discussing the cartoon while watching it on TV. Might have been in the same short.

Roadrunners used to be not uncommon in this part of Texas, and they were always highly curious birds - I loved to see them on the porch. But they are ground-layers, and alas the fire ant invasion pretty much decimated them. I hardly see them around anymore.