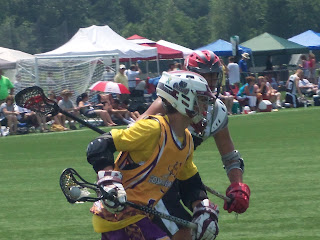 It used to be a mostly prep, mostly Mid-Atlantic sport, but that is changing. My stepfamily played - they still do, into the next generation and even a third.  Not many players have grandfathers who played.

But the Wymans were never so athletic as the Rowleys.  They would take national honors in things,we would win the Underwater Swim at Camp Mi-te-na, or the standing broad jump in 8th grade. We were good at waterskiing, anyway.

All five boys played some sports, and I have stood on a lot of sidelines.  One more year to go.  I think.

What will happen to your social life away from the sidelines?

My goal is to become a harmless old drunk, but I keep having to be a good example for someone.

Lacrosse has exploded in popularity across the country. Sports Illustrated did a survey on it and asked kids why they were taking it up. Somewhere around #2 or #3 on the list was "Mom and Dad don't know the rules, so they don't yell at the coaches and referees."