I wrote a whole series in January 2011 about Road Rallies, a puzzle-hunt for teams of four per car that I used to design for group events. Ten puzzles scattered throughout a city, which would take 2-4 hours to complete.  I have no idea why this one had many more hits than the others. The rest of the series is Road Rally II, Scoring and Details, and a fun addition, Anti-Gravity.

Road Rally anecdotes will mostly be in the last post. As even a basic description is detailed, I figured full directions on how to do this wouldn’t be much more.

These are sample puzzles (click to enlarge). Easy one first. Other types are limited only by your imagination of what can fit in an envelope, I suppose. We once opened an envelope to find a sheet of green construction paper with 43,560 written on it - which wouldn’t make any sense if you aren’t from the Manchester area, but was decoded as Green Acres, an elementary school. I once took a photograph from the base of an identifiable building and asked what was 75 yards west. 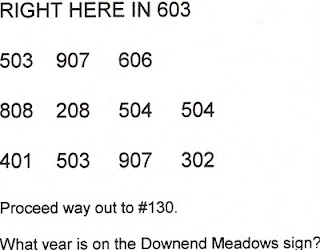 If this sort of thing doesn’t grab you, the rest of these posts aren’t likely to enchant. Not that every puzzle has to be congenial to your particular skills – that’s why you have teams – but you can likely get the drift. 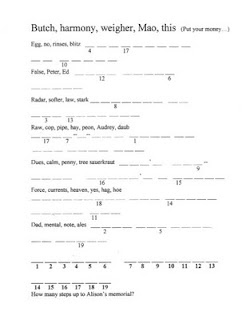 The puzzle designs would have to be modified these days, in an era of hand-held electronics. We’ll discuss this in a subsequent post. For now, think old school, armed with the reference books of an earlier era: dictionary, thesaurus, atlas, phone book.

Speed is essential. It is not necessary to fill in every blank or correct spelling, only to figure out where the puzzle is sending you. I recalled that my wife was once able to leap to “Livingston Park” from very few letters embedded in a set of directions. We solved the further directions on the way there.

The destination for the first puzzle is OAK HILL ROAD You will notice the question at the bottom “What year is...?“. You would drive to Oak Hill Road, bash around until you found the sign and identified the year, and use that answer to open the next envelope. That ingenious scoring method will be the subject of the next post.

The second puzzle was good for variety. Some players took to it with ease, others just couldn't do it, even when they got the idea. The destination was BEHIND KIMBALL SCHOOL. There was a memorial there, with six steps leading up to it. (The concept, and some of the sayings, were from Games magazine. I am terrible at this kind of puzzle.) 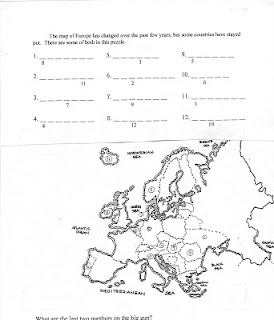 Puzzles built off the map of Europe are my most-repeated. The numbers may be hard to read, but the destination is WRIGHT MUSEUM, a WWII museum in Wolfeboro.
Posted by Assistant Village Idiot at 12:18 AM

hi dear...its really good post,,n as i m interested in puzzles so it really attract me,,well keep it up n give us smthing good post,,,