Only On The Map - Squantum 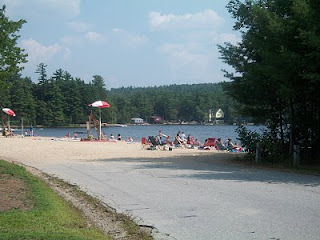 I found later, as I was doing my research, that both Delorme and googlemaps get this wrong. Those both place Squantum at the top of Contoocook Lake in Jaffrey, and there is nothing defineable as a village center here. Just a rather nice beach for town residents, as above. All other maps of Jaffrey, from early to late, place Squantum at the top of Black Reservoir, half a mile east. That area shows settlement, even clustered settlement, back 150 years.

I drove right through the part that really is Squantum without taking a picture. Because I was following the Delorme Gazeteer. So you'll have to make do with this. I wondered if this were another of those situations where the railroad had a depot or loading station there, as in Bowkerville and Rockwood, but the Jaffrey - Peterborough spur never went near this.

Squantum as a name raises interesting questions. Because the settlement pattern for this part of NH involved gradual Puritan expansion along upper Massachusetts with forays north, as well as new Scots-Irish immigrants settling anywhere that looked unused (I exaggerate), the most likely suggestion is that this was named for the Squantum section of Quincy, MA. That in turn was named for the fascinating Tisquantum, or Squanto, interpreter, guide, and general rescuer of the Mayflower settlers.

But the matter isn't settled. "Tisquantum" was the name of a local native deity - rather an evil one, in fact. We may as well say "Prince of Darkness." Squanto took that name as a sign of power, signalling to all who got the read that he was not someone to mess with. "Hell's Angel" might be a good equivalent. As he had survived the white man's diseases that had wiped out 90% of the areas Indians just before the Pilgrims arrived, and was skilled at playing all sides off against each other throughout his life, maybe he had a point.

Our denomination's children's camp is called "Squanto," but I don't rub that in anywhere. It's the myth of the helpful, giving person, combined with the tendency of all summer camps to name themselves after some Indian or butchered Indian language phrase, that is being commemorated here.

Back to Tisquantum. There were still Native Americans in the area when the village was settled, albeit few. The settlement may actually have been on an area previously inhabited by the Pennacooks. Arguing against this theory is the current belief that the Abenaki/Pennacook/Missiquoi group of Indians didn't have much to do with that particular deity.
Posted by Assistant Village Idiot at 8:25 PM

I consider myself an aficionado of typos and you've got a winner with "Sots-Irish"!

But... "make due"? I'm now reconsidering my opinion that this is never a typo.

oh no... no ouchie for the first one. "Sots-irish" is wonderful as it works several ways. Really... that's an accomplishment and it's one I would be proud of making myself.

Donna B.'s right... that typo is a thing of beauty. Nothing to ouch over.