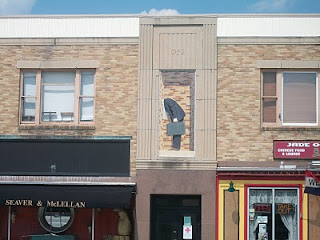 Sorry to cheat here. This is in Jaffrey, a larger town that was the southeast corner of the day's trip, and the best anchor for talking about the areas just beyond. Plus I liked the trompe l'oeil painting downtown. In contrast to Fitzwilliam, which I mentioned last time, Jaffrey, Rindge, and New Ipswich are becoming yuppified - or whatever it is they call yuppies nowadays. There is this nostalgic charm, but it tends toward faux nostalgia: road signs with horses on them and new houses in groupings ending in "Estates." The town center is less pricey but more authentic - it still has a shoe repair shop that you enter down a half-flight of stairs from the street, for example. Finns moved into this area a century ago and are still over 10% of the population. Very conservative Apostolic Lutheran Finns who had a dozen children per family and grew New Hampshire's dominant construction firm, Sepalla & Aho. I think that's split into smaller firms now, though you can still find those surnames all through the building trades in the area. They didn't live in town, but in the outskirts, generally.

Now one dark underside of these charming areas I have been writing about. Starting in the late 60's and gaining momentum in the 70's, the town thugs from Winchester to Jaffrey started hanging out together in Troy, terrorizing residents, shaking down businesses, with the usual B&E's and gratuitous assaults. They eventually graduated to murder, and a number of them were sent off to the state prison in Concord. (One is doing life and is still there.) They were known as the Troy Boys, a silly-sounding name but still dangerous. They became more notorious statewide after they went to prison. The Hell's Angels, up from Lowell and Lawrence, MA were trying to move into NH, and the Manchester based Die Hards had members sent to prison at the same time. (I knew a few of the Die Hards from my old neighborhood - one quite well. Glad he liked me. I apparently had done him some favor - or he thought I did - when were were in grade school.) All three gangs wanted to rule the prison population - the unlikeliest group, the rural Troy Boys eventually succeeded at this until some semblance of order was established in the 80's. The other two groups, along with Devil's Disciples and other gangs trying to establish a foothold, were notorious at Bike Week in Laconia, taking over whole sections where the police refused to go. But the Troy Boys never went the motorcycle route - just rural thugs who liked to beat the crap out of people and didn't much care how badly damaged they got in the process. You can read some current memories of them here. It's hard to find much information about them anymore.
Posted by Assistant Village Idiot at 11:31 PM

There were a lot of Finns in the Northern part of Michigan during the Copper/Iron mining boom. Lots of people named Aho still live in that area, also...I ran into a few when I studied at a University in the region.

per the gangs: a strange set of events. Even stranger that there was enough 'business' in the area to draw groups like the Hell's Angels in.

You can never tell. The bully from my elementary school days ended up OK. He married a younger girl who, from what interaction I had with her, led me to see her as a personable, assertive sort who wouldn't take any guff from anyone. If he had kept up his ways, she wouldn't have married him, or wouldn't have stayed married.

A peer from my hometown did time for killing his wife, whom he suspected of adultery. While I would not have predicted it, in retrospect I could see some traits in him that could correlate with killing his wife. There was a self-righteous strain to him. From playing sports with him, you could tell he had a bad temper. But all that is in retrospect.