For The Person Who Accused Me of Lying About This... 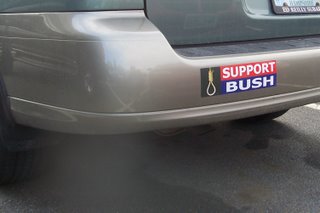 Wow....yeah that is not a nice bumper sticker at all!

OMG... I drive a Subaru Baja too... same gray also.... Ahhh, but an entirely different political philosophy. Besides, I live in Texas!

http://www.break.com/index/bush9.html
Love him or hate him, these are pretty funny. I always like it when the president quotes songs from the who.

Where's your sense of metaphor? You seem to be quick to use the word "hate." Feeling a little touchy lately?

I'm sure the person who has this sticker, and 99% of the people who own a similar one, think it is funny because no one would ever suspect them of real incitement to violence. My point is that when the roles are reversed - as in the examples of my last paragraph - those same people believe some horrible and frightening force is loose in the republic, and that real violence is being suggested.

Point of comparison: the vicious sentiments put forth on the liberal blogs whenever a member of the current administration, such as Dick Cheney, has a medical problem, versus the great warmth and kindness expressed for Elizabeth Edwards on the right blogosphere lately. Don't see it? Doesn't change the fact.