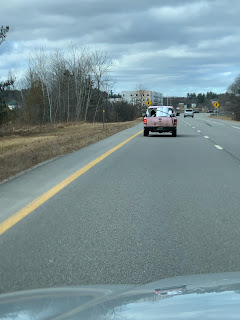 This is like one of those Defensive Driving exercises, where one is asked to point out the possible dangers in the photo. This driver has just swung right on a split in the highway, yet as you can see, his left blinker is still on.  It has been on for at least four miles. His pickup truck is painted pink, which might be delightfully eccentric and fun, but might also denote a person of uncertain judgement. For this reason, the securing of his cargo is suddenly called into question.

I usually assume a basic competence in pickup drivers, who are at least partly My Sort Of People . But these two red flags cause me to wonder about other things, and while the securing of this cargo may be fine, it is not inspiring.  It could be slapdash, hard to tell from here.

I am reminded of an incident in Hungary in 2001, when I was in a rented Opel (multiple stories there) and behind a box truck open at the back. It was going a bit slow, and I was following the usual American distance in such circumstances, looking for a chance to accelerate out and pass on the two-lane highway.  The items in the truck looked a bit precarious, but I likely just figured "No big deal.  This is a professional company, and there are regulations about securing goods." Then it hit me: "This is Hungary, they don't have those regulations here, or at least, no one pays any attention to them."  I held way back, even though it would take a longer space to be able to pass this thing.

When I was teaching my five sons to drive, I would use these situations as teaching opportunities. It is a judgement call whether you want a knucklehead in front of you, right where you can see him, or want to get well past him as fast as possible.  For a-holes running up the back of you until they have a spot to pass, always noisily, I would tell the boy "Don't take the bait and don't get angry.  You want that guy where you can see him, not in your mirrors God knows where."  Teenage boys pay no attention to such things at the time, but at least three of my five did eventually see the wisdom of this.  And the other two are at least better than they were.

Good catch. Looking closely, the cylinders are strapped, but it isn't obvious that the items on the left are.

That does not look like the typical Mary Kay vehicle or Mary Kay items. I'd also be concerned.

My oldest granddaughter got her learner's permit about a week ago, on her 15th birthday. Probably because I am older now, I'm much more nervous about her being on the road than I was about her mother who got her full license at the same age. Then again, her mother was driving herself to the airport for flying lessons at 15. She soloed in a Cessna 150 on her 16th birthday -- the same age my granddaughter can solo in a car.

Are we too overprotective now, or were we idiots 30-40 years ago?

Looks like a metal scrapper. Scrappers used to come by my job sites all the time, asking if they could go through my dumpster for metal scrap. Usually not much metal, but sometimes they would hit the mother lode if they came the day after the store refitters had thrown all the old store shelving and supports away, or we had just scrapped the 400 pounds or so of aluminum security gates from a pharmacy expansion.

My only rule was...I'm not responsible if they get hurt and they cannot leave a mess.