I am reunioned out at this point.  College 46th - bought merch for the first time in over forty years. 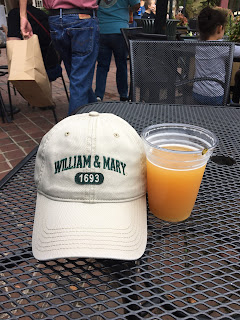 Then a memorial service for Swede Nelson, a choir member of many decades, which brought back people I had known in the 80s and 90s. Then Manchester High School Central 50th, all in about 10 days time. People commented with some amazement how much I remembered, as they always do.  Last week, I'm not so good at.  But remote memory continues outstanding. I still recall the phone numbers of many, for example. I was touched that a few people remembered things about me as well. Occasionally things I had myself forgotten, but have the ring of truth.

When people have different memories I used to just assume they were wrong. Then I had a son who is as good as I am who sometimes disagreed, and I had to admit he was correct sometimes. So I tried to become more humble with others, knowing that because of the vagaries of memory, and forcing memories into packets according to narratives we want to be true, I should be cautious. Yet I find in practice I was mostly right the first time.  I have anchor points for many of these memories, such as play productions or the year people arrived at school, and fairly often another person present will nod and confirm what I am saying after thinking about it a bit. And when someone has a different memory that is credible, it is usually immediately apparent to me who is correct. It's  not always me, as when one friend said "Are you sure that was Don?  Because I didn't room with Don freshman year, he was across the hall.  I roomed with John for one year." I knew he was right. I had the wrong bit player in the drama.

Mostly I am amazed that people don't remember things. Nostalgia and reminiscence are such staples in my life. I have done enough revisiting of old places, however. There were some that I kept longing to see and eventually did, finishing up about ten years ago. I found I had little interest even at the college, where I had only been twice in the last 25 years. The people I knew are no longer in those buildings and I don't care. I also got my vindication that the Wren building, despite being Georgian architecture, is not symmetrical.  Look at the photo above and you will see that either the cupola or the doors and portico must be wrong, as they are not in line.  In fact it is the doors that are wrong by about a foot, which I concluded by pacing it off, then confirmed by comparing the doors in the back, which line up with the cupola exactly. How they missed this in the 1920s reconstruction I don't know, but certainly no one is going to be fixing it now.

Fragments of images remain from college. A yearbook refreshes my memory of a face, for a while.

I recall the room where I first discovered the evil cunning of filter capacitors--but it looks like every other equipment storage room, just with cables and meters in different places, and those are all blurred away.

"The people I knew are no longer in those buildings and I don't care." Ahhhh, now you have seen the light Grasshopper. Welcome to my world. :)

I ran into a guy I hadn't seen in 25 years or so. During the few weeks I had to endure his work company, it became clear this guy never grew up. He was still doing the same stupid crap he did in high school and in conversations, it was always...Hey, remember when we did this or that? 90 percent of the tales he reminisced about were complete fabrications of the facts, mostly leaving out the parts that made him look bad...and there were a lot of those.

Even hanging out back in the day, I never cottoned to the guy. The only reason I put up with him was because he was my late brother's friend.

I'm usually a nice guy, but I finally had to tell him that I didn't like him, never did like him and to lose my number and don't contact me again.

I have never been to a reunion of high school or college. I have been to Missileer gatherings, having been in 18 holes in the ground in Arizona and 15 holes in Missouri. One of each is a historical site.