The vaccines are not causing worsening fetal health, but Covid itself is causing 20-70% increases in preterm delivery.  British study. It is always hard to know what to do with the immediate accusations "The vaccine makes you infertile," "It's completely untested on pregnant and breastfeeding women," and the like. Such thoughts hit us at a primal level, and those of us who grew up with stories of the thalidomide babies know it is not impossible that some medicine might have catastrophic effects on fetuses. There are other chemicals that seem to have much more minor, but still deleterious effects. On the other hand, this is often the first accusation out of the gate based on no information, and has become a Cry Wolf standard.

I have some sympathy for people who catastrophise about anything chemical, whose fevered imaginations conjure frightening images of GMO foods, food additives, and new medicines.  The key part of the phrase is fevered imaginations. There is a U-shaped curve for phobias according to intelligence because they have better imaginations. They can imagine all sorts of terrible things, and vividly. The number of actual incidents and problems is low, but they also have better memories. L Ron Hubbard was a sci-fi writer, a pretty good indicator for imagination (though not for judgement and balance) and birthed a thoroughly paranoid religion, Scientology. We wonder why smart people can get so much wrong and overestimate medical, environmental, and political danger. They remember more and imagine more.

So on one level I get it. A new type of medicine or vaccine comes in and our contamination fears go straight to the core: Babies. Food. Monsters. Our confirmation bias is intense even though the real incidents are few. Yet eventually we have to force our better brain to overrule the fears and look at actual known dangers. Covid: moderate danger profile for pregnant women. Vaccine: ultra low danger profile for pregnant women. Good news.

Imperial College of London study about carrying the virus indicates the vaccinated are 2/3 less likely to carry Covid than the unvaccinated, at the height of the recent Delta surge. That's pretty good given the reduced efficiency of the vaccine against Delta.  It's nice to see there's still a lot of good in it.

Bsking is trying to switch us over to looking at hospitalisations as a better measure of what is going on, so I add in this, from a hospital Grand Rounds presentation. 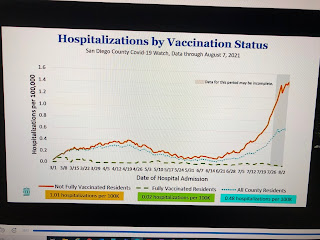 This should alarm those who live in states with lower vaccination percentages. My actions affect your health, which hardly seems fair, but has always been the reality in every society.

My prediction is that we are over a 50% possibility of vaccine boosters being recommended the farther we get from their administration (Feb-Mar for me), which in turn increases the possibility that we may be going yearly.

You sound like you are confident in the facts you state. Where does your confidence come from?

I trust Lyman Stone, who passed them along, and I trust the hospital that had the Grand Rounds. I don't mention them because I'm not sure they would like that going out under their name. But you have heard of it. The source for that San Diego County one is sandiegocounty.gov/content/dam/sdc/hhsa/programs/phs/Epidemiology/Covid-19_Daily_Status_Update.pdf Except I can't make that work at the moment.

Stone included his source in the tweet. He has been solid throughout.

If it's the case that the medical community thinks the covid vaccine should be a yearly shot, then it shouldn't be mandatory, just like yearly flu shots aren't mandatory. Besides, it seems like the flu shot is always treating last year's variant.

My understanding - admittedly suspect - is the decreasing effectiveness of vaccines over time has to do with the disease's adaptation to us. We should therefore expect that vaccines against new diseases have a high degree of effectiveness which diminishes over time. Also, every year's influenza vaccine has to be manufactured over time, and so is based on what they think is the closest approximation to what will get here to America months later. There are usually a number of variants in the East, and we don't know which one will travel.

Schools make some vaccines mandatory and others optional. Hospitals push yearly flu vaccines hard because of their long experience with the spread of illness of people in close quarters. In some cases they are mandatory. In the military they line you up and give you shots without explanation, and more if you are going to bad places. Missionary groups often insist you get particular vaccines before going to third-world countries. Whether a particular vaccine will be mandatory should depend on the expectation of danger and benefit, not the political consideration of whether people are still angry about the last one.

A question for you AVI, you seem informed. Would not the standard covid test pick up the vaccine created covid spike? Thus giving more positives among the vaccinated? I have seen no discussion anywhere on this thought.

I don't understand what you mean about a vaccine created covid spike. It is entirely possible I am obtuse on the matter. Let me ask around.

AVI, Sorry, I was not clear. As I understand it, the covid vaccine causes the body to create a protein that is in the covid spike. This replicated protein is what triggers the body's immune system. Would not the covid tests register the presence of this replicated covid protein and give a positive for a vaccinated person?

IIRC there are other vaccines that warrant a booster every so often. Why immunity should decay over 10years for tetanus and mere months for some older covid variants I don't know--that seems like a very interesting question about how our immune system works.

If you asked me for an ignorant WAG I'd guess that there are redundant mechanisms at work to produce different specific responses--a crossfire. They'd presumably have different intruder "memories," and could age differently.

Look up antibody dependent enhancement. It seems to fit with the current outbreak after vaccination.

@Blick - so the PCR and rapid tests for active infection will not be impacted, but the antibody tests might be impacted.

My understanding is that the material delivered in the vaccine is solely there so your body mounts an immune response, and the original material goes away rather quickly. It is also is not present in an amount that would ever be enough for the active infection tests to detect. Anecdotally (but somewhat compellingly, for me at least) I work at a hospital that is in the process of mandating the vaccine and currently has about 90% of staff vaccinated. We also have an asymptomatic testing clinic for staff and we only have a handful of positive tests per week out of about a thousand people tested. The number of positive cases among staff dropped substantially when the vaccine was rolled out. Personally I've had multiple negative tests and no positive ones since being vaccinated, including some shortly after my vaccine.

For the antibody test though, you could be correct. This is true of people who had prior COVID as well, and so I believe most states have taken these tests out of their dashboards. I just checked and mine has, they report active infection testing only. I do think some states may put this on their dashboards in a separate category. It would be under "serological testing" if it was there. From what I can tell the CDC is currently recommending antibody testing only be used as "supportive" evidence if people also have other symptoms and that people with these antibodies could be considered suspected cases and placed on separate registries if the state wanted. If you had a state you were interested in I could take a look. CDC case definitions here:

The UK government just reported the following data, tucked away in their report on variants of concern:

Less than a third of delta variant deaths are in the unvaccinated.

Let me say that another way - two-thirds of Delta deaths in the UK are in the jabbed.

From the 1st of February to the 2nd of August, the UK recorded 742 Delta deaths (yes, the dreaded Delta has not taken that much life).

The vaccination rate for those over 50 in the UK is 85-90%. If the vaccines did no good, then one would expect a percentage of deaths near that. To put that the opposite way, 10-15% of that group is unvaccinated, yet they still had more than 30% of the deaths.

The numbers say something opposite to what you are claiming.

My resident statistician came over and tells me I underestimated even that, and my case is stronger. UK vaccination rates are 90-95%. Perhaps irrelevantly, browsing around it seems that the vaccination holdouts tend to be Afro-Caribbean and North Country rural. If I may indulge my prejudices here, those would be the two groups I would identify as "superstitious rather than scientific."

The statistician also notes that numerator-only statistics are always worrisome.

It is true that deaths went way down after they achieved 90% vaccination, even with Delta variant in full swing.
https://covid19.healthdata.org/united-kingdom?view=daily-deaths&tab=trend