The economic history of England from 1100-1600 was wool. From 1600-almost 1800 it was wool and cod. You think of history being about kings and battles and religious arguments, but in any discussion of British history in those times, if you think in the back of your head “How does wool fit into all of this?” you will see things that others don’t.  There was trade in sugar, slaves, and tea, but those were not the big-ticket items. At the end of the 18th C mills became big, and over the next century or so lots of other ways of making a bundle in trade came in: cotton, railway equipment and other machinery, coal, clever banking. Wool, however remained something of a big deal, especially in the Celtic areas, though much of the industry had gone into the colonies – America, Australia, and New Zealand.

Wool is a good-news/bad-news item in history.  Britain exported raw wool to the Low Countries who did all the finishing and sending it on around the world. But when there was persecution or attempts to gouge money out of cloth-producers on the Continent, English kings encouraged Flemish or Huguenot weavers and other craftsmen to come over and set up shop, keeping even more of the money right on the island.  Continental loss was England’s gain.  Of course, the colonies did the same thing right back to Britain centuries later.  GB now has mostly a specialty trade in wool: tweeds, heavy sweaters, worsted.

I have a couple of episodes in wool history that are not generally known that may be of interest. The Black Death devastated the European population in the mid-14th C.  When I was back in school the estimate was 30-40% of the entire population, but that has risen over the years.  This summer I heard the phrase “maybe 80%” for the first time. After all these deaths, there was no one to watch over the sheep and keep them out of the cleared areas where people were trying to grow things.  They wandered all over the countryside damaging the crops of an already starving people – but they also prevented areas from reforesting, and were edible themselves.  As domesticated sheep, they weren’t that good at looking after themselves with their birthing and clumsiness and general stupidity, but they weren’t that far from the wild either, and they survived better than the unattended grains, vegetables, and cows. (Pigs and chickens also hung on pretty well.) Thus, they were still there a couple of decades later, only needing to be pushed behind hedges to be shorn while someone repaired the gates and someone was found who remembered how to milk them.

So in the short term after the Plague they were a devastating problem to a devastated people. But soon after, they were a sort of roving bank account that could be drawn on by whoever could pretend to have a claim and had a place to put them.

Good news/bad news in America.  The story continues to circulate that the Midwest and West were settled by Union soldiers from New England who saw what great land there was in Ohio and packed everyone up in a wagon the minute they got back to Vermont.  I used to say that myself years ago.  It’s a great story. Unfortunately, Ohio was already the third-largest state by the Civil War, and even Indiana already had a million people.  Not much room for a boy from Bellow’s Falls at that point.  There was some settlement out of New England, all across the top of the US to Portland and Seattle.  Just not places that any Swamp Yankees had seen during the Late Unpleasantness. No, NH and VT had their exodus much earlier. This was masked by other people moving in because of the mills in NH (also in VT, but less so), but seems to have been well under weigh by 1820 in NH, delayed just a few years in VT.  Because of sheep. Half of America had gone starkers after 1810 because of Spanish Merinos but nowhere worse than VT, with NH running second.  These had been forested states, but no longer.  The trees were cleared out and the rocks dug up to contain these most excellent sheep in pastures. It was a lot of work by hand, but at the prices wool was fetching it seemed a better prospect than trying to grow barley amidst the rocks. The movement west may already have begun in a trickle before 1810, farmers already having recognized that the ground was poor and figuring they might try their luck on the rumors of better. Many had already had a go at raising lesser sheep with low profits and weren’t going to be putting their money into sheep again, no matter how fluffy. 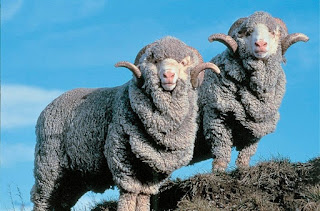 Then came the Year Without a Summer in 1816, the result of volcanic eruptions in the Philippines in 1814 and the Dutch East Indies (Indonesia) in 1815  New England was particularly hard hit and harvests were terrible that year and next.  It was the final straw for some who had been contemplating the move, and about 10,000 left NH by 1817, and 15,000 left VT. (Maine not so much.  The fish did okay.) Unless, of course, if you had sheep.  Cold was tough on meadow grasses for sheep, but they were able to fare much better than oats or corn. They get through these cold snaps without much noticing, it seems. Had it not been for the sheep, the exodus would have been greater. When the sheep price bubble burst a few years later the exodus resumed, though more slowly, because now…woolen mills!  Cash money and then the trains started to run, keeping wool prices solid if no longer exciting. Sheep raising hung on a long time, with a couple of resurgences as well. Eventually Vermonters decided that cows were even better, and New Hampshire went into cotton instead of woolen cloth and the sheepses went into the background.

I am not advising any of you to acquire sheep, however.  My two Romanian sons who were forced to be shepherds for two years, delaying entering school, assure me that goats are a much better deal.
Posted by Assistant Village Idiot at 5:23 PM

Humans have been wearing clothing for a long, long time. I'm not sure of the current date estimates for the first clothes but it is very ancient. It is probably the first real industry. More complex than stone tool making it involved the development of processing hides and fibers, making precision tools (needles) and design and sizing of clothes for individuals.

Fabrics are astoundingly complex as anyone who's been to a fabric mill in any era can attest. making thread or yarn, then weaving it to fabrics is a tremendous achievement.

There is an estimate of 170,000 years based on the DNA of body lice. Fascinating reasoning