It’s much rarer now to hear the phrase “Old Boys’ Network.”  My guess is a) it’s true in fewer places and b) relatedly, if it’s identified anywhere someone is going to move to eliminate it. I coined the phrase “Old Girls’ Network – though I have to imagine that a few others also had the idea occur to them – because of the hospital I worked in. New Hampshire State Hospital had its own school of nursing that was just coming to its end when I arrived in the late 1970’s. 50% of the nurses, and 75% of the higher-ranking nurses had come through that school. They favored each other, groomed the new ones for career track, and provided a set of cultural rules of how to behave and advance. If you observed their norms, they would protect you even when you made mistakes, even major mistakes.  Protected you against outsiders, anyway.  Major errors were remembered, and would likely bump you off any advancement track for years. “Keeping control” of a unit was considered the highest virtue, and bad things were done in the service of keeping control were not only overlooked, but defended.  This included verbal abuse of both patients and line staff.

It was a martyrdom culture. You showed up sick or injured and found someone else to get your children to day care.  If your needs changed, that didn’t matter.  Arrive on time, stay until the end, endure ridiculous schedules. The few, the proud. I am reminded of a line in “Sister Act”  of an older nun complaining about the loosening of standards, describing carrying water long distances “back when nuns were nuns!” The posters of the day would emphasize the saintly, sacrificial aspects of the profession, and joining it was not merely being handed a diploma.  There were “capping” ceremonies with candles, kneeling, and not only uniforms, but outfits specific to your school. They look ridiculous now.  However, it was difficult, dangerous work for not very much money, so you had to give people something in terms of honor and self-respect to compensate for that. 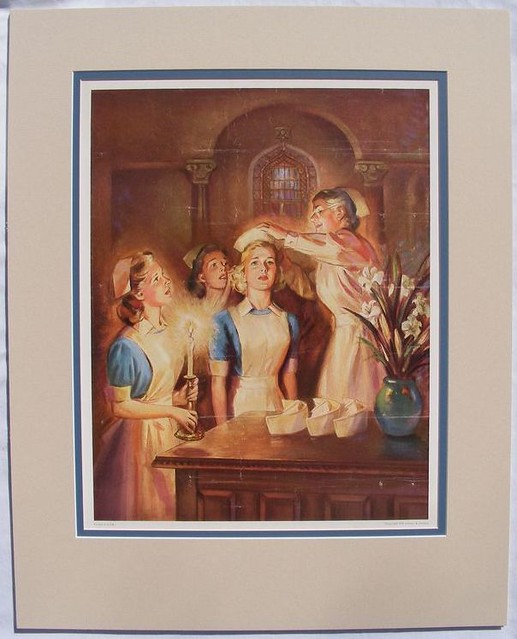 We have a new historical display in the lobby.  It is dominated by NHH nursing paraphernalia.  I don’t think that is entirely because they infiltrated the committee and made sure of that (though this did happen).  I think it’s because they saved this stuff.  They had an abundance of textbooks, of old caps and uniforms to choose from.  Doctors don’t save that stuff. OT’s and psychologists don’t. The maintenance guys save a lot of pictures – sometimes with people in them, but usually trucks, roads, and buildings.

Social Work is a female-dominated profession, as is occupational therapy.  My wife is a librarian, a profession which is similarly so. Yet none had this aura reminiscent of a regiment or a religious order.
Posted by Assistant Village Idiot at 5:07 PM

Wasn't nursing largely done by nuns for a good long while? Maybe that's where they get the religious-order sensibility.

jaed, that was my original thought too and I knew British nurses were called "sisters". I still think there's something to that, but maybe it was more copycatting the economic system rather than a religious calling.

"...their lives were indeed similar to those of nuns. Forbidden to marry, they were cloistered in “nurses’ homes” on hospital grounds, where every aspect of life was strictly disciplined. Student nurses were not paid at all, and because too many hospitals valued this free labor over classroom and laboratory time, many spent their days scrubbing floors, doing laundry, and other menial tasks. Curricula improved, however, in part because of the development of a tradition with caps: each nursing school had a distinctive cap that women wore after graduation, and because her educational background was literally visible every day, schools soon raised standards so that their graduates would affirm their quality."

That seems the likeliest explanation.

"We few, we happy few," the trial by fire: bonding is very sweet, well worth the nightmarish conditions that forge the bond.

I graduated 2 years ago from a junior college nursing program which still has most of the characteristics mentioned. Not caps, but we did have a formal pinning ceremony.

As a guy, the training methods had a distinctly 'female' vibe that is difficult to characterize. There was an extremely strong emphasis on following strict rules that seemed essentially random: 'Do this not that, because we say so.' The entire process seemed designed to produce fearful young nurses who couldn't make decisions and would obey their superiors. Interacting with other new nurses at work who graduated from other programs I get the impression all nursing schools do this.

We are a teaching hospital, so many of the nursing programs do their psych rotations here. For that piece, at any rate, they seem to have grown out of that. In fact, some of the schools seem to have students who want that sort of conscientiousness-is-all approach, and are uncomfortable with what they get here.

But that's psych, always an outlier, so I don't know what conclusions can be drawn.

It's not just nurses: women used to be relegated entirely to jobs in which the valuable traits were unquestioning obedience: secretary, receptionist, maid--you didn't want these people to be making policy or joggling your elbow or competing for your job, you wanted a loyal sidekick who was 100% on board with your agenda. Guys are generally raised to be uncomfortable fulfilling that role. Women could do it in complete confidence that they weren't any less honorable or valuable for it. They were the auxiliaries, the helpmeets.

Things had to shake out a lot when men started to take traditional women's jobs and vice versa. The Doctor is no longer a Godlike infallible figure, for instance. Of course, we often still need that quintessentially traditional male characteristic of invincible self-confident authority, such as in a surgeon who takes on challenges on the frontier of medical science, or an airline pilot in an emergency. We're struggling very hard with how the teams surrounding such stars are supposed to act when they see the great leader heading into an error. We're also struggling hard with how flexible and humble and cooperative the central authority figure is supposed to be.