Everyone can see at a glance what this is, right? If you look more closely you can identify the individual units as well. Strange map, certainly.

Stranger still is that it is by a Russian painter - though one might as readily call him Polish or Ukrainian - around 1913.  If you remember your history, you will know it couldn't be before 1912. The only place I can find this painting is in the slideshow in the online magazine Lurve about Malevich, drawn from the Tate Gallery exhibition in London.  The Tate art-definition feature also uses him to exemplify Supremacism.  Kazimir Malevich of Kiev invented and named the style, one of many ways of approaching painting he used over his career. I can find nothing in commentary about him that suggests he had any interest in the US, any especial fondness for geography, or any desire for political controversy in favor of democracy.  In fact, I cannot even find the name of the painting, who owns it, nor any reference to it, though it was likely exhibited at the Tate this year.

I find no other maps in his paintings, no reference to countries farther away than Austria, nor even much in his suprematism where the individual shapes are anything other than abstracts. There is a brief note that he did like aerial photography for a few years. There are some recognisable crosses. There is is "Boy With Knapsack," below, which is about as vaguely representational as one can get. That's the closest anyone comes. But I'm still not getting his sudden desire to paint the 48 states and District of Columbia a year or so after Arizona and New Mexico come into the union.

He does seem to like ambiguity, as in his "Red Cavalry" is decidedly not stirring patriotism, even though painted in the Soviet era (1928). 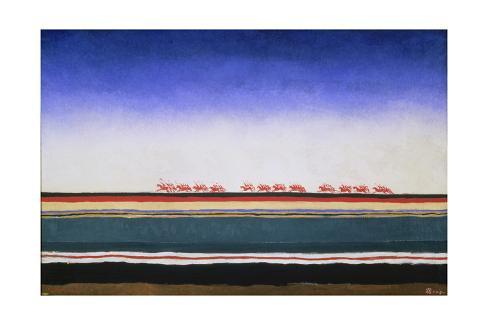 Socialist realism was declared the only allowed style of painting not long after, and Malevich was condemned, as they all were, really, shortly before his death in 1935.

One of my sons suggests that it is not by Malevich, but something later in supremacist style, and thus inspired by him, as on this website. Could be, but there is that Tate slideshow.

Update: I have concluded that the attribution of this painting to Malevich was an error on the part of the person writing the review of him at "Lurve." I assumed that because an art reviewer must know more than I about such things, I didn't need be alert for mistakes. I just followed along blithely, swallowing everything.  I don't think it was intentional on the part of the writer.  It's a good lesson for me about trusting rather blindly.
Posted by Assistant Village Idiot at 10:30 PM

Doc at the Radar Station said...

>I find no other maps in his paintings, no reference to countries farther away than Austria..

Perhaps the painting is a play on the name "United States of America" in the sense of states of consciousness. I don't think there was any another country at the time that had "states" in it's name either. So, it was unique in that sense.