A coworker got lost looking for a specialty shoe store, and described discovering a lovely road coming out of Goffstown.  She wondered if I lived anywhere near it.

It turned out to be High Street – Route 13, Stark Highway – rising out of Goffstown Center at the corner with the library, the Episcopal Church, the park with the Civil War monument and the fountains, and the popcorn stand, a local landmark.  It is a lovely road, and I should know.  I have driven it 16,000 times on my way to work and back. 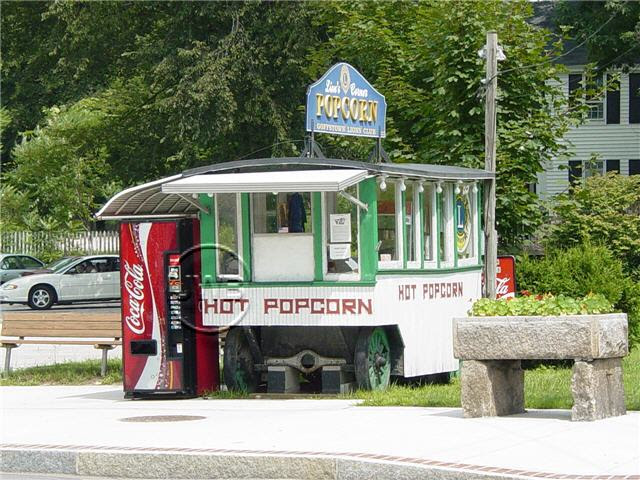 There is a town in The Phantom Tollbooth that gradually becomes invisible because no one sees it.  Many people rush past, but no one notices. Something similar shows up in The Little Prince, and in a thousand inspirational calendars that tell us to stop and smell the roses, appreciate the beauty around us…okay, fine. Not that they’re indirectly preaching what sensitive souls they are compared to the rest of us or anything.  You try and gaze in rapturous wonder 16,000 times at the same 17 miles of road, Jack.

I do like it, though, and think I admire it with good frequency.  It is the road I recommend to people going on foliage tours, if they are staying in this area rather than going to the mountains.  Up north, you get drama, but not so much in the way of ambience.  Only a few spots are spectacular on my commute, but it’s charming all the way to Concord.  It was an older road put in through the forest by the Scots-Irish before 1800, all hills and small ponds.  Stone walls run along most of the length and out at right angles, sometimes seeming to hold back the trees from overhanging, other times simply marking the near boundary of more open space that cuts back 5-50 yards into the woods. There are clusters of houses built from that time, most in good repair, and even some barns still standing.  Barns of that era are pretty much have to be either restored or torn down, and I’ve seen a good deal of both over the thirty years.

There are historical markers, state parks, nature preserves, orchards, a shooting range… a golf course continually under new management trying to hang on, the occasional sign for a home business: maple syrup, Christmas trees.  Dearest to me are the intermittent long views in all directions – you can see Mount Washington on a clear day every once in awhile, 80 miles away.  Well-named roads, Story Hill Rd, Black Brook Rd, and unnamed private dirt roads, mostly abandoned now, running off into the woods, farm roads no longer needed.  Paved driveways curve and disappear as well, hiding the homes of owners who wanted more isolation.  Or perhaps bought property with no access, back farm lots no longer in production.

It’s hell to drive in a blizzard, BTW.

I like the realness of it.  Dunbarton Center looks at first like a picture-postcard or a movie set, but a second glance reveals that amidst the historic houses with little plaques, there are banal 70’s ranches and capes, not always kept up. Throughout the drive there are newer suburban colonials not far from small ill or oddly-built farms of a century ago.  People live here – there’s no bedroom-community faux naturalness here, no Deer Crossing signs put up for show to make you think there’s wildlife when there’s not. The wildlife is real, as you can observe from the road kill.

It’s that way start to finish.  There are gorgeous old Victorians right from the first few yards of High Street, and old Victorians that are…not so gorgeous.  A few newer houses are inserted between, buildable chunks of property carved out from larger plots by some special pleading before the zoning board, or more likely, built in those last years before it sunk in that Goffstown was becoming a suburb as well as a small town, and Live-Free-Or-Die, build-whatever-the-hell-you-want, Bill, so long as it isn’t noisy or smelly…just wan’t going to work anymore. Up at the other end going into Concord you go past all the Turkey Pond, Audubon Society, St. Paul’s School property on your left, modest and even shabby houses on your right. It isn’t so much contrasts as continuum.

Going the other direction from my house on Route 13 is pretty attractive as well, for similar reasons.  If my commute were 17 miles that way it would look different, but describe similarly.  Even beyond that, from Milford down to the Mass border, 13 is attractive - though that first three miles south out of Milford Center might put you off your feed a bit.  That’s a stretch of contrasts that don’t add up to much charm, I’m afraid.  The elements subtract from one another rather than add. Goffstown Center isn’t quite so charming as the rest of the drive either, but both places are important if you are going to make the scenic drive to see The Real New Hampshire:  they have restaurants, ATM’s, and bathrooms.  I don’t mean to kick those places too hard anyway.  My neighborhood, just off this road I’ve been praising, may be the least charming part of the whole 50 miles.

Additional note: While there are ways to do scenic circuits involving other roads, such as 77, 202, or 114, you would do better retracing your steps. The road looks quite different going back the other way.  Hills do that, as the scenery is markedly different going up versus going down.
Posted by Assistant Village Idiot at 7:54 PM

I'm a piker compared to you, I've only got about 4000 round trips on that route. And, unlike you, I actually live on the highway. The worst drive I remember was during the ice storm (2008?) when I got about three miles and had seen signs of devastation everywhere and decided to turn around and drive to I93 - the only time I have ever done that. I felt vindicated when my boss, who drove that route for 40 years, arrived in Concord around the same time I did and had left 45 minutes earlier than I had. He discovered all sorts of back roads in Dunbarton that morning.

Anyway, you did a good job of describing one of So. NH's treasures that is missed in the days of the interstate.

I know those other roads because I used to adventurously seek them out. The thought of driving some of them in a blizzard unnerves me.

For readers: Michael lives at one of the spectacular views.

Viva back roads! I wonder if this is more of a guy-thing though? Mrs. Scienceman would rather take the interstate any day, given the choice. What about Lady AVI and Ms. Michael?

My husband and I have often made the 3-hour trip between our home here and our former home in Houston. The interstate is quickest, but we both prefer the coast road, which crosses the Guadalupe River delta and several bays before turning inland past the South Texas Nuclear Plant, the halfway point. This route approaches Houston from the south, still its least-developed quarter, and allows us to get almost there before being assaulted by parking lots.

No blizzard considerations here, of course. All we have to worry about is hurricanes, during which none of the route I've described would be passable.

The scenery on the Gulf Coast is of a completely different kind from the charming hill-dale-and-forest you see further inland. I find it intoxicating: flat straight to the horizon. When I'm away for any length of time I need to get back to it.