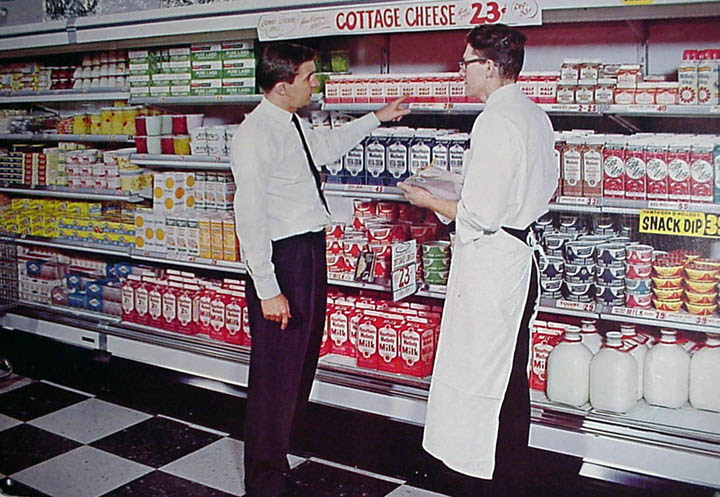 I often have my grandmother accompany me in my imagination when I am at the supermarket. She was born in 1896, and would have been familiar with supermarkets up until around 1970, but for some reason it is a 1951 version of her that I escort around the store. Perhaps I picked that year because it is just before my birth, and I want to avoid some vague version of the time-travel grandfather's paradox. Except it wouldn't, so it's just an impression of appropriateness, I guess.

She had a reputation as a good cook, so that is perhaps what suggests supermarkets to me.  How do I know of this?  Well, my mother told me.  But my mother was also a single mom with two boys and a lot less budget, so perhaps she was comparing unfairly.  Everyone's grandmother was a good cook in those days, weren't they?  People always say that about their childhood: "My Mom was a great cook!"  Compared to who, Charlie, your pals in sixth grade?  Well yeah, I would think so.

This photo seems to be early to mid 60's. There is less selection than it looks like at first. There are more to be seen at this charming site.

She mostly switched from A&P to Grand Union-Champagne's in the 1960's, though she used both. I know this because she still had books of Plaid Stamps, but they were far less numerous than S&H Green Stamps. She had a corner store directly across the street as well. How long that had been in place on Blodget St. I don't know. It was not there when they bought the house in 1934, and its edge is not visible in an early 50's photo, but it was there by 1960. Her uncle J.A. Lindquist ran the Swedish grocery at the foot of Concord Street, but I don't know much about what they carried and whether Swedes did most of their shopping there or just specialty items. His house was a block from where they put up the A&P - don't know if that irritated or not.

When this little fantasy first occurred to me decades ago I assumed the reactions we all superficially assume: amazement and perhaps even fear and disquiet at the selection, coupled with disdain for current products, such as a hundred types of sugary water.  Yes, I imagine the exotic foods from Thailand, the fruits out-of-season, the abundance of spices, and the superabundance of almost-prepared meals would catch her attention.  Yet I don't think we always see things through past eyes very well.  The casual dress, even slovenliness, of women at the market would appall her, and might distract her attention from other changes we think more important.  That some favorite products were missing and no longer available might loom large. We know that life can go on quite nicely without them, but we might equally think that our own favorites of this era were a great loss if they were not around in future markets.

And of course, if she were brought out of that time to this she would be far more interested in things other than supermarkets.  She would want to know what had happened to her son and her daughters, herself and her husband.  Whatever conventions God would grant I could tell her of such things, she would naturally fasten on the others which I could not - as would any sane person.  Who cares about flavors of Listerine when thinking of mortality and legacy?

We revert easily to the small and familiar, and do not willingly look at the big picture.  That's a feature, not a bug, of humanity.
Posted by Assistant Village Idiot at 10:40 PM

Are you sure she wouldn't ask why milk was so expensive?

(All the prices that I can see in the pic are below a dollar.)

Well, my mother still is a good cook, and her mother worked as a cook, so I think I'm safe with that particular claim.

I spent some years of my youth in Africa, where my family was (being American) relatively rich. Even so, we scraped along, bought goods when the ship came in, tried to buy only what was needed. There were tiny shops with cheap cloth and soap and other things, but not stores with Western clothes.

I came back to the US for college, and went to a mall for some cheap cold weather gear. I was, as the expression went, weirded out. The offerings were overwhelming and the disproportion to the need so great that it hurt to be there. I still feel it a little. (I'll happily spend hours in a huge bookstore. Consistency, thy name is somebody-else.)

I think the store would be similarly jolting.

But you're right, the "slobs" and "slatterns" would be even more startling.

She'd only be going shopping after catching up on family, so your scenario is reasonably isolated.

Your card is just beautiful -- and what a lovely gift. Any woman would be thrilled to receive this.
Thanks for you inspiration.