I ran into my friend Eric, who grew up in this town. He tells me he's running for president, on the plan that you should be able to make money, because it's America, and free enterprise...capitalism, but that after you've made enough, you should give it away.  Not by taxes or anyone taking it from you, but you should donate to the town library, or all the churches in town. 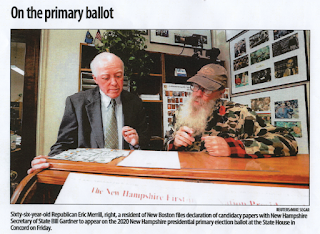 This happens because Eric grew up in NH and still understands that the New Hampshire Way is that everyone has the right to run for president, dammit.

In answer to the obvious question, yes he does work as a Santa in December.  He also plays the trombone in some local bands. He retired a few years ago. If you want to learn more about his candidacy, you're going to have a hard time. Unless you run into him downtown, as I did, you're going to have to rely on what folks around here remember.  For myself, I believe he went to school on the GI Bill after getting out of the Navy, then worked for the state in something to do with drainage inspection, where he had to wear heavy boots, dungarees, and a hard hat, but also a shirt and tie. That was what he always had on when I saw him in his pickup. He has a prodigious memory for names, faces, and events of his childhood, and keeps track of what happened to those people after they grew up.

I knew him before I moved here.  I met him at church camp in 7th grade, where I also met Gary Hicks, now a justice on the NH Supreme Court, and Larry David (center), probably the smartest person I have ever met. It's nice living in a small state most of your life sometimes. Two degrees of separation from everyone.
Posted by Assistant Village Idiot at 1:37 PM

Well, now I’ve got someone to vote for in February. Better than the alternatives.

I've got bumper stickers if you want