I have heartily disliked Colin Woodard's division of America into eleven regions, still preferring Joel Garreau's Nine Nations of North America, for three reasons:  First, Woodard relied on the word of academics in the regions to explain to him where the boundaries were and who the people were.  I don't know if he still does that, but it used to be so, and it led him to accept explanations that people would like to be true, but remain unproven; second, he just loves the historical New Netherlands and its values, ignoring the values and treatment of the natives of the er, other places the Dutch settled; third, he's a condescending prick whenever he is describing groups he doesn't like.  I have long preferred the Garreau's divisions.  And tone.

However, Woodard's analysis of the 2016 election by region seems very strong, and his model may indeed supersede Garreau's 1980's version, much as I wish it were not so. 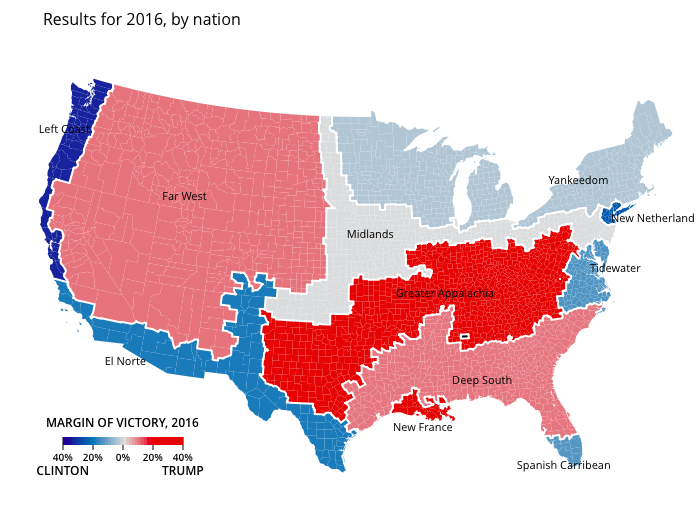 If you take a north-south drive across Illinois or Ohio you can definitely see the westward extension of New York and Pennsylvania in place names.

I live on the fault line between dark red, pink, and dark blue.

I should have mentioned that as accurate as these regions are, the trend that cities are deep blue should be superimposed on it. If you don't make that mental correction the map will mislead you. Rural Yankeedom is mostly pink, but we've got lots of cities. Tidewater is historically connected to Greater Appalachia and Deep South, but it's got some big cities, plus coastal cities.

In his "Battle Cry of Freedom," James McPherson draws the line between North and South at about 41° N. This separates the northern economy of cows, milk and wheat from the southern economy of pigs, whiskey and corn.

I was born and raised in Massachusetts, but I have lived most of my life in central Ohio and some in Indiana. There is a very strong north-to-south cultural gradient in both states, and I tend to follow McPherson's analysis.

I read Garreau as a callow undergraduate and was impressed. He has something called "The Foundry" which might now be called the Rustbelt. Garreau's book struck me more as something written on a lark, by a roving journalist and desk editor, which after all is how the book was done.

Rather than adjudicate the differences, I'll mention two other books.

besides Albion's Seed there are at least two other books worth browsing.

2. a very old economic regionalization by...Bogle. I want to say it's called "Economic Regions of the United States_ but I can't find it. Outdated, but has a good regionalization. Big..."doorstopper book

Note: approach is economic and demographic, but not cultural / ethnic / religious.

I'm the geographer who follows your blog and pops up in the comments from time to time. I don't say this to claim authority, since everyone knows more about the geography of someplace than a credentialed geographer does. We could, of course, sit up all night quibbling over the exact placement of these boundaries, and would not doubt have good fun doing so. We could also propose further dissections. But in most cases we would just be adding details of our local knowledge to a small-scale map. My real objection is to the names, and more especially to their miscellaneous natures. Some are historic, some geographic (e.g. Midlands), some pop-political (e.g. Left Coast). If "New Netherlands" and "Left Coast" are referring to the same thing (the essence of regional culture), they do so in a very roundabout way.

So I am left wondering about this roundaboutness. "New Netherlands" is the most striking example, since it tries to hide the capital of the empire behind Washington Irving's Knickerbocker Tales. "Yankeedom" is a little more complex. (By the way, cultural geographers call this New England Extended.) I gather that you are old Yankee stock, but old Yankee stock is now a minority throughout the region. And Yankee culture was not just the Unitarian-Humanist strain that this name strives to remember.

1. I asked my fellow geographer Darrell A. Norris (he is at SUNY Geneseo) and he said...

a. He would want to look at the Dictionary of American Regional English, or DARE, for their cultural regions based on language, and then

b. he mentioned some of the work of Wilbur Zelinsky.

I'm quoting him without his authorization, so he might correct me--we were chatting informally

2. It looks like both Joel Garreau and Colin Woodard are journalists, not academics, not Ph.D.s. As if that matters.

Come to think of it, I wonder what Donald Meinig, also an academic geographer, would have come up with. See his four volume geographical history of America.

3. Scale is important. If NYC gets its own designation, why not Los Angeles?

Ir's probably better to do the US and Canada together. I believe this is done in Hudson's _Across this land_. Many people moved back and forth across that border on their way west, in part because of the Canadian Shield and its inability to facilitate crop production.

So Upstate NY and Southern Ontario would be one zone--Seattle would merge into Vancouver.

4. Peter Gould, among others, did isoline maps for preferences--where undergraduates would like to live after college. He found that people in Alabama made distinctions about places within the South. For Yankees, the south was treated as more monolithic.

In that sense, I wonder if both Garreau and Woodard have a northeast bias, a Boston-to-Washington perspective. Maybe not--I don't know their biographical details.

5. History. Boston was a Yankee city--eventually overwhelmed by Irish and then later by Italians. Does this matter?