After posting the rather clever Massachusetts Stereotypes in the post-before-last, I browsed around the many other stereotype maps and images: New Hampshire stereotypes, New England stereotypes, England stereotypes...American, European, regional. The beauty of the one I displayed, and many that I like, is that it is essentially affectionate, and a community's expression. It is balanced, not trying to pick on any group in particular. Labeling Cambridge "Commies" and the islands "White Caribbean" would be offensive in many contexts. Describing SW NH as anarchists, and the Lowell/Lawrence/Methuen/Haverhill section as mill towns an methadone would also rankle if some Los Angeles comedian put that forward. But taking them all together, it becomes family banter, teasing. It might sting a bit but we bear up under it for our own good. And because it preserves our ability to take soft shots at others in the family. But most of the stereotype maps were just mean and bigoted. You would only think they were funny if you agreed with the bigotry and had a mean streak of your own. There was no affection for many of the groups on your map, just contempt. 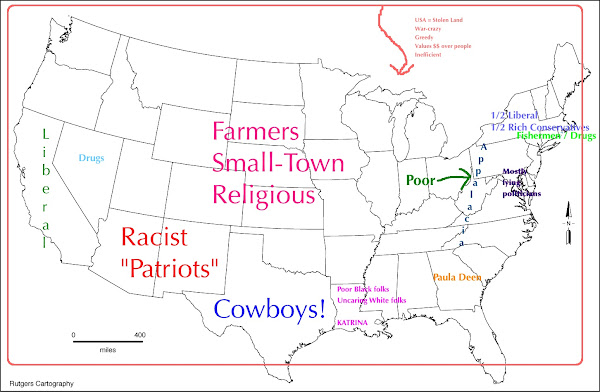 Garrison Keillor was charming and successful because even as he made fun of Central Minnesota and later, American arts and music culture, it was clear that he had a real affection for them both. Inasmuch as any of us shared in the cultures he lampooned - I was a Lutheran when he first came out, and my previous group identification had been the musicians, actors, storytellers, and poets on the fringes of success - we also winced and considered ourselves warned. There was irony in his Hopeful Gospel Quartet but more of his continuing desire to live among them. He brought in chorales from flyover country that were darn good. But when Keillor didn't actually love the culture he was talking about, it turned vicious quickly.

Over at Maggie's, Barrister links to an article about Lee Jussim's* research on stereotypes, which shows they are often accurate. We apparently think this way because it's efficient - a shorthand for navigating the world.  Theodore Dalrymple has written on the necessity of stereotypes as well - that without this 80% accurate instant evaluation, we would be unable to raise children or move about safely. So which is it? The easy answer is that the American ideal has always been that we start everyone at zero, every time, on anything of importance. We have never even approached this ideal, but we can at least say we have done better than others, and have held the ideal as desirable across many political persuasions, in good weather and bad.

*Dr. Jussim is showing up a lot in articles I have been reading this year.
Posted by Assistant Village Idiot at 8:59 PM

I graduated from a two-town regional high school in NE. Of the two towns, my town was more rural,less affluent,and less well-educated. It was not unknown to hear such taunts as "dumb farmers" thrown at us in high school- though the other town also had its share of farmers. Decades later, such barriers remain, as I heard from a classmate who attended our last high school reunion, or from more current reports from our old high school. At the same time, I and others from our town got elected to the high school student council, so the barrier was permeable.

While in this instance my town was sinned against, my town was also sinning. People in our town had their own out-groups of various ethnic, racial or geographic descriptions. Not everyone had the same out-groups. We had a rather diverse listing of out-groups, depending on who was making up the list. To each his own prejudice. From my experiences in elementary and high school, I concluded that we all form in-groups and out-groups.

Anyone who claims that he is free of bias, free of prejudice, is deluding himself. When I hear third-party accusations of prejudice, such as lily-white social justice types accusing another white of prejudice, I laugh to myself. You not know what fools you are.

Shortly after I moved to Texas in the '70s, I visited my Okie grandmother and her second husband. His daughter was also visiting with her children. I told his daughter, who had known me since I was a baby, that the South had no monopoly on racial prejudice. As a teacher in an integrated school, she appreciated hearing that. I had already seen enough prejudice in different manifestations, racial or otherwise, growing up in New England.

As the product of a North South marriage who has split his life between North and South, I have heard a lot of regional stereotypes over the years. One of my favorites was a letter to the editor in the Houston Chronicle complaining about Yankees eating chopped liver. Chopped liver, that was a really favorite dish among the Yankee families I knew growing up in New England. For those readers not from New England, the term Yankee in New England refers to "old stock," to WASP families who can trace their time in New England to before 1800.

Checked the link. Not sure how I got to be Anonymous, but my comment remains true. He can still be funny, but not when politics raises its ugly head. Which it does, rather too frequently.

We needn't start at zero, but we ought to guard against the danger of refusing to see any new facts that don't fit our stereotype. When I drink coffee, I have an idea of how it's probably going to taste. That's fine as long as I don't keep drinking ink by mistake because I refuse to re-evaluate given new evidence.