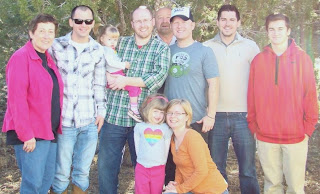 Caption: Right behind him is a 400 foot drop.
The entire family met at Grand Canyon for Thanksgiving, traveling between 1500 – 8000 miles each to get there. (New Hampshire, Norway, Houston, and Nome, for those who have forgotten last year’s map.) Mostly by air, but Ben and David added 1200 miles by train to their adventure.  A permanent memory, and quite a remarkable time. We ate together, we took photos, everyone fussed over Emily and Sarah, we watched Caillou in the morning and sports at night - and we fed the llamas. You heard me.  Llamas.  Maybe we should look for a llama Christmas ornament to commemorate.  The enclosed photo has the supposed patriarch voluntarily invisible in the back, aesthetics trumping honor. Emily and Heidi are in the front, and across the middle are Tracy, Chris, Sarah, Jonathan, Ben, John-Adrian, Kyle.
The uncles all got niece-names: Uncle Duck, Uncle Princess, Uncle Christmas, and Favorite Uncle, the last being Kyle. Story behind each.
For our troupe, remarkably good fortune.  Only one visit to urgent care (strep);  got only seldom and briefly lost – by our best navigator, no less; dodged a speeding ticket;  and had Christmas stockings for two sons.  The only job change among the five boys this year was Kyle, who took up dishwashing to fund his lacrosse gear habit and driver’s ed.  The others are all at 50+ hours/week somewhere, as most jobs are in hard times.  We are grateful they are gainful.
Update:Jonathan and Heidi found a Christmas llama for Tracy’s birthday.  A coup. It will live here one year then start circulating among the boys.

I’m going uphill
David has long maintained that exercise is bad for your health – emergency rooms are full of injured people who have been exercising – but a more accurate formulation is exercise is only good for you when everything goes right.  Which in his case, is not a lock. Yet there he goes, climbing either of the small mountains nearby quite often and in all weather, because it’s the only form of exercise he doesn’t hate. This can’t end well.
Update: I think I have torn cartilage in my knee. Like I said.

I’m thinking of learning another language, maybe Saami.
Do you remember that movie in the 80’s where the pod people came and switched bodies with people, so that they looked the same but were different inside?  Sometimes we worry about that talking with Chris.  There was a period shortly after he came to America when he had forgotten all his Hungarian and much of his Romanian, but was not yet fluent in English.  He (ahem) did not excel at Spanish in high school. Yet now here he is in less than two years, having acquired decent Norwegian (Bokmal) to go with his fluent English and Romanian.  When he posts a picture on Facebook, people comment in any of the three.  BTW, don’t get a speeding ticket in Norway. 20kph (12.5 mph) over the limit?  $1400.

It’s 10:00. Do you know where your father is?
Twice this year Tracy’s dad went missing, once all night. To Tracy’s great relief her dad, now 92 years old, decided to give up driving after the latter incident. He remains the Big Man on Campus at Sunrise Assisted Living where the ladies fight over him, including an incident in which a vase was thrown at the dinner table. Cool.

Do you need these Bethany emails, or can I delete them?
David and Tracy have picked up a host of ministries back at Bethany, our old church: Sudanese Sunday School, teaching adult studies, Tracy is a deacon.  Still, I am not sure we will fully recover from losing our Concord community. Perhaps we aren’t meant to, this side of heaven.

People just give him things.
Our job is to teach Kyle to work hard – in school, in a job, for goals. How do you teach that when people just give him things?  Everyone seems to look at Kyle and think “What Ho!  There’s just the lad to receive this object I have in my hand!” This year - we predicted that Kyle would travel a lot this year, and that proved out - after he got back from the Covenant High conference in Tennessee (where he high fived Chris Tomlin), Kyle went on a free Caribbean cruise. Because his friend wanted a buddy, and his parents went “Of course! Kyle!”  Harder days will come sometime. For now, we just encourage him to keep expressing gratitude.
Posted by Assistant Village Idiot at 8:14 PM

1. We need to hear the stories behind the Uncle names.

2. re: exercise and injury. You are missing the point. The fact is that you will still get injured just puttering around the house. The point is that by getting injured during exercise you have much better stories to tell.

3. re: language. No surprise that Spanish was a bust. How can you expect to learn a language when none of the other people you are speaking with don't know the language either. If, however, you meet a speaker who is attractive in ways that motivate multi-linguism -- well, there you are.

4. We also need the story of the thrown vase.

5. I suspect recovery is rather like addiction. You never get over it. You just learn to go day to day.

David, excellent point about the exercise - you do get better stories that way, and it's not like the injury rate is zero setting the table or sorting socks.

Uncle Duck is Ben, who became magical to Sarah for his ability to find ducks anywhere at a moment's notice. Including long-eared furry ducks, for example - so now you know his secret. JA talks in a high squeaky voice and calls Emily "princess" at least twice per sentences. It can really grate after a while - like about 90 seconds. Chris is Uncle Christmas because that's what Sarah said when she heard his name.

The vase was thrown by one elderly lady at another at their table of four when she thought the latter was monopolising the conversation with Stuart. The offender has been banished to a non-Stuart table.

You could do anything with a crew like that