In my discussion Me ‘n IQ (which Maggie’s very nicely linked to) and my other recent discussions that touch on race, I have had a picture in my head which has illustrated much of my thinking – a graph of overlapping bell curves. It occurred to me today that I have assumed, on the basis of no evidence or thinking whatsoever, that everyone else had the same overlapping bell curves in their minds as well. If I can be said to have been aware of this at all, with anything that might technically qualify as a “thought,” it would be that I was explaining to y’all that the overlapping bell curves did not look like this 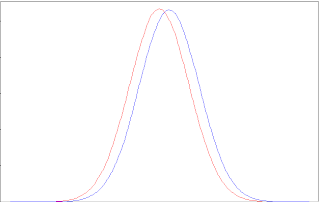 which would not be much of a societal problem, but more like this*

If you like, you can try Bing images for “overlapping bell curves” and see a host of what I am talking about. All sorts of things are measured. Many of them are just made up illustrations, but the principle holds. For much of history, I think the pyramid shape of few elites, a few more competents, and then a great mass of proletariat, has dominated people’s conception of how the abilities of society are distributed. That has certainly been the European and elitist model. America has been more mixed. I think a third illustration, sort of a completely flattened curve also exists, in which people think that for every 100 people, 10 are exceptional, 10 are darn good, 10 are pretty good…all the way down to 10 being useless, but no particular place on the line being more common than others, is also common in our thinking. But the idea that a whole lot of people are right in the middle, with very few at the extremes, is the one to hold onto, because it applies to so many things.

Whenever you see a bell curve with two bumps, it is almost certain that two populations are being measured, both quite nicely Gaussian on their own but being measured together. You can look at a few of these overlapping curves and slide ‘em back and forth, to see how much effect there is when the midpoints are nearer or farther apart. I think that will illustrate my irritation at people thinking that putting Algebra II to rap lyrics, or encouraging more children’s authors and illustrators to include hispanic-looking people is going to make the remotest dent in the problem, and my frustration at not having any better ideas myself. It also should give conservatives great pause before assuming that everything would be fine if the people at the 85 line or below – most of whom are white, BTW – would just try harder. There are things people can do – avoid drugs, look presentable, choose good friends, be responsible – but their road is still harder than yours, and going forward, there may not be enough jobs for all, no matter what we do. 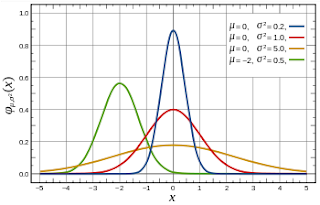 *The difference is exaggerated here, as everything seems to be mis-graphed up 1-5 points, favoring the whites and asians. I don't know the source well enough to guess whether that was intentional.  But the graph is reasonably close.
Posted by Assistant Village Idiot at 10:17 PM

One other thing to consider: Gaussian distributions are an idealized model that match reality quite well when there are many factors in play, all of which are independent of each other and roughly equal in magnitude of effect. There's some reason to believe that the IQ distribution is actually fatter than Gaussian on the low end.

That's because there are (sadly) many ways to reduce someone's IQ by 20 points (head injury, substance abuse, toxin exposure, malnutrition, etc.) but no known way to raise IQ by even half that. If group A is exposed to these negative stressors at a higher rate than group B, then applying a Gaussian model to the IQ distributions of both will show group A with a shifted bell curve, just like in your examples. Really, however, the two curves should look almost identical on the right half (A's being a bit lower vertically than B's), but the left half of group A's curve should be a different shape (higher and shallower sloped) than group B's. Remember, the IQ test itself is normalized (i.e. the "weight" of a right answer to a given question is set so that the overall results for the population is a normal = Gaussian distribution) so the published results of the tests will always appear Gaussian, even if the underlying "true" distribution is something else.

The developed world has made huge strides over the last 100 years in eliminating some of these stressors (pellagra, chronic syphilis, birth injury, heavy metal exposure, and so on) and, indeed, the average IQ has steadily risen. Correlation, not causation... but still, quite a correlation! The "average" recruit to the US Army in WW I would test at 85 (mildly retarded) on modern tests, for example.

I would also like to remind you of the example of the Irish immigrants to the US. In the 1800s, they were widely seen as congenitally stupid and semi-feral. But it was all due to dysfunctional behavior, notably substance abuse, petty criminality, chaotic sexual habits, and disrespect for education. When the behavior ended (that is, the Irish community no longer tolerated it), the "innate" intelligence differences disappeared. IQ measurements today show no difference between Irish and English IQs. That would have seemed ludicrous to someone in 1850s New York though.

hmm... behavior = IQ in testing? Isn't that another way of saying that the tests are culturally biased?

Laura - largely true. But the low end effects have already been largely remedied in the American populations: micronutrients, early nutrition, head injury. Not entirel7y, but enough to know tha the answer does not lie there. The same effects show up when SES is held constant, for example. Ron Unz has some of the best numbers for your POV, BTW, and includes the Dutch, urban vs rural, etc. The worry is that the environmental effect has largely shot its bolt, raising the AA scores from 70 to 85.

You can find writers on this topic who seem secretly gleeful about the lower scores of some groups, happy that their own white group is close to the top and enjoying that. I feel that tone in the comments sections at times, too - over at Taki's for example. But I think it's a horror. I'm hoping that there are still more points to find environmentally or because of test artifacts or the behavioral factors you mention. Ten points is a virtual erasure of the problem, and even five would give me hope. But The Gap has not changed since the 1960's.

Even a little shift can change the relative proportions in the extreme tails by a lot.

Good point. And because of the importance of perceptions in a population, the tails can matter quite a bit.

Laura, another thought occurs to me that I would like to run by hbd chick and that group. The Irish, despite being Roman Catholic, were outside the Hajnal Line, and thus more prone to cousin marriage. That likely vanished upon arrival in the US, and raised the floor quickly. What we see as a conscious effort to abandon pathological behaviors may be driven in part by having fewer in the population who were simply unable to cope with urban complexity from birth.

It was only a couple of generations, which is a little fast for anything but cultural changes.

You can't raise the ceiling much in a few generations, but you can raise the floor. See Greg Cochrane at West Hunter.

But I think it's a horror.

Just out of curiosity, are you likewise horrified by the gap between average white IQ and average Ashkenazi IQ? (I make that comparison because if I remember correctly, it's around the same size as the US black average/white average gap.)

I personally am more horrified by the latter than the former, but I think that's because of my suspicion that the black/white gap is largely due to environment - that is, that something is happening that robs many black Americans of part of their intelligence potential - while the white/Jewish gap I suspect is genetic.

I have no real support for either suspicion, though.

It is about the same gap. It doesn't bother me at all. But I think gross numbers are a large part of that. Ashkenazi were never more than 4% of the population, and if they took a disproportionate amount of the awards and top slots, everyone else still had slots without much scrambling. Ditto the Northeast Asians, though that gap is less. That's not so much the case with African-American, Native, and Hispanic populations.

A lot of folks do have resentment against them. Perhaps I am less bothered simply because they were my friends in school and in the workplace. Intelligent secular Jews have had enormous cultural influence, and perhaps I should resent them as a group for that. But I don't. Many of those changes have been good, after all, and much of the negative was byproduct rather than aim.