I knew, even back in 1969, that the reference was to Lydia Pinkham's Vegetable Compound. But i didn't know, until I looked it up for this post, that Elton John, Graham Nash, and Jack Bruce were all in the original UK version, or that the song was based on an older one. 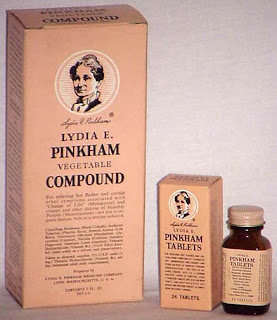 As for Lydia, she was from north of Boston, and there is a well-baby clinic with that name in Salem, founded by her daughter. Her 19th C patent medicine for "female complaints" - presumably menstrual discomfort - contained, among many other useless herbs, gentian root, which gives Moxie its distinctive aftertaste. It was also 20% alcohol.

Lydia Pinkham - not to be confused with Lydia Pense and Cold Blood: http://www.youtube.com/watch?v=fds9ZQU5T8c