Only On The Map 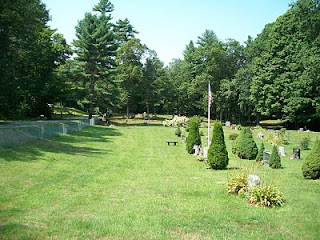 Many villages in NH are marked on the map but are not actual towns. They are not incorporated, don't have a high school, aren't a recognised post office address - but there they are on the map. It may be a single spot, usually at a junction, or may be a whole section of town, with the map-point put rather randomly at some location they can make an excuse for. Usually, only the locals will recognise the name.

I like driving back roads on vacation, and this time I decided to make these villages my focus. I am familiar with all the town-names in NH and can locate them on a blank map, but most of these villages are names that don't register to me. I thought there might be some NH history to learn by visiting them. We'll go one at a time, as the mood takes me, and see what we learn. We'll have a dozen or so of these.

Above is the cemetery in Westport, (part of Swanzey) which looks as if it could accommodate quite a few more folks. Below is also the cemetery, if one faces in the opposite direction. Looks like they really expected the town to prosper and grow. They should have enough room for a few centuries at this rate. Don't let the "port" part fool you - it's 70 miles from the ocean. New England towns were often named after places back in Great Britain. In this case, there is a Westport in Somerset and one in Ireland. Neither seems a good nomination. This part of NH was generally settled by the Scots-Irish in the mid-18th C, but Westport Ireland is in County Mayo, not a very Scots part at all, and Somerset is far SW. But Swanzey itself was named after the town in Wales, so perhaps we should favor the Somerset origin. 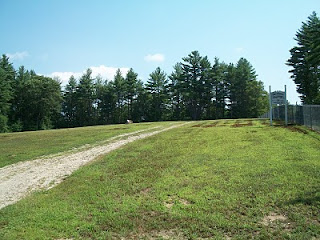 This is the Slate Bridge, a half mile away, one of four covered bridges in Swanzey. I remember the old bridge, with its weight limit for passage going down year after year until this restoration was built. On the way here I passed Depot St. in a somewhat more densely settled area. There's a clue to the village. Westport had cloth manufacturing, and was a stop on the Ashuelot branch of the Boston and Maine RR. Going up Depot St reveals no depot any longer. 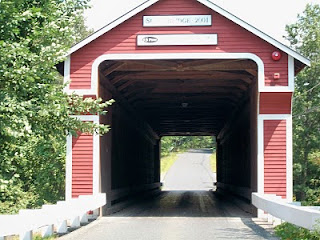 The white signs always either list the supposed toll rates - in pennies - for walkers, horses, carts; or they caution you that passage at a rate faster than a walk is prohibited. It's cute the first time.
Posted by Assistant Village Idiot at 9:47 PM

Maine is like that too, with the mysterious villages. Only some of ours actually have zip codes. Makes it interesting if you are trying to contact the local government. then there are the villages that do not exist any more but some of the real old folk still refer to that general part of town by the village name.

I would say that as a whole Maine is a lot less "cute" than New Hampshire. It was a lot less settled and a lot more unpleasant place to live back in the day. In some of the smaller towns, the heartbreak of the early (and current) residents is clearly visible.

Furthermore, there are a lot of places in Maine that were settled only in the late 1800s and abandoned in the 1990s. Just enough time for people to figure out that you can't live there successfully. Even before Europeans, the state did not have very many natives.

NE cemeteries can be fascinating. The fanciest gravestone by far in a cemetery in my hometown had an engraving about "vale of tears." I found it amusing to have such ostentation- not a trait valued in NE- coupled with that engraving. Is that an instance of gravestone humor?