Only On The Map - Scotland, NH

It's a pretty good guess that anything named Scotland anywhere near the Merrimack or Connecticut Rivers in New England is going to be a Scots-Irish settlement from the mid-18th C. However, I can find no evidence for this regarding Scotland, NH. There are no Scottish surnames among the original settlers, and the genealogies of the English names do not originate in the Border counties. The settlers seem to have come from old Massachusetts families moving westward. The first church was Congregational.

The terrain doesn't look Scottish. A great deal of SW NH is hilly - everything in these towns seems to be called Something Hill Road - but Scotland is swampy. So go figure. I don't know why they called it Scotland. 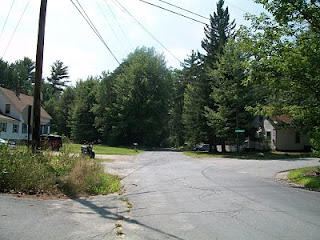 Looking at what mapquest tells me is the town center, above, I must conclude that there is no village, just a section of town called Scotland. 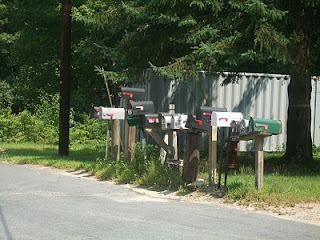 Just up the road, this is what serves as the post office, I suppose. There are only two buildings in sight, and I didn't see many others on the entrance roads. Some of these people must live way back in the woods - which isn't that unusual around here.
Posted by Assistant Village Idiot at 9:25 PM

Yes the climate/topography of New England does seem vaguely similar to that of the British Isles, which is probably why most of them moved here. You can tell much of Maine was settled by Irish since a lot of the names are copycat.

What is weird to me is that the Irish settlers did not move around much - my ancestor is buried in the town I grew up in, 6 generations ago. Makes me wonder how bad Ireland must have been, to uproot people as immobile as that. Either that or life in Maine was so hard they could not afford to move. Seems the first scenario is more likely.

Anna, I would go with your first. Compared to the old sod, even poverty in Maine looked good.

The father of an uncle came over from Ireland. When my uncle was a child he once said to his father that Ireland must have been a pretty nice place, having heard some hints of nostalgia now and again from his dad. My uncle's father replied, "If Ireland was such a nice place, I wouldn't have left."

At the same time, several friends have visited the cousins back in Ireland, and enjoyed the experience. All one friend had to say was that she was Father John's niece, and she and her husband were given the time of their lives.

That Americans were able to locate cousins in Ireland is also a comment on the relative immobility of people in Ireland. In one case, the Americans visited Irish cousins about 120 years after their relatives left Ireland.