Only On The Map: Ashuelot, NH

The name may be familiar if you have traveled in the region, but not because of the village. The Ashuelot River is one of the main tributaries of the Connecticut, and everything nearby is named after it: Ashuelot Campground, Ashuelot Restaurant, Ashuelot Motors. Rather like "Alamo" in San Antonio, or "Mayflower" anywhere in eastern Massachusetts. But there is an actual village, in the town of Winchester, and it has yet another covered bridge with the same tired joke on it. This is a bit fancier than the many other bridges in the area, though, more complex in its construction. 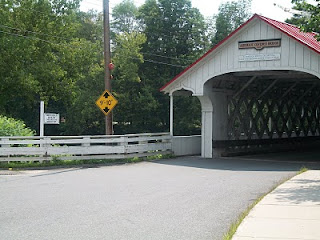 The sign advertises a small museum nearby. Those are everywhere in NH. It's who we are. 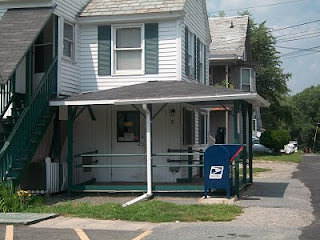 That it was once a more important village is evidenced by the existence of its own post office, however small. It was an important railway stop; in addition to the usual textile mills and tanning, it boasted one of the first makers of musical instruments in the country. Those days are long gone, however. Many of these SW NH towns are quite poor. These houses are reminiscent of the New Hampshire I grew up in. You wouldn't notice, yourself, because there are slowly deteriorating buildings from this era most places in the country. But to me, this was Derry, and Londonderry, and Merrimack, and Auburn, and a dozen other towns in the SE of NH that are now essentially suburbs of Boston, with upscale houses and expensive restaurants. 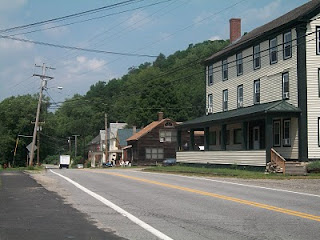 I enjoy your pictures. What a different part of the country you live in from my home on the Gulf Coast of Texas. Europeans haven't been here very long. Hurricanes knock most things down every hundred years or so, anyway, so we have so little that's old.

That is similar to the part of Maine that I am from - has not been prosperous in 100 years so everything is that old. Like the plumbing...

On the plus side, Maine never takes economic downturns (like the supposedly upcoming one) because there is not that far to fall. We have been in a Great Recession for 100 years.