Not actually ABBA, but Bjorn Ulvaeus, member of the band. He was one of the "B's" in the middle, along with Benny Andersson. The "A's" were the girls, Agnetha Faltskog and Anni-Frid Lyngstad. Clever, eh? A-B-B-A.

It is flipping amazing how fanatic folks are about ABBA. There are sites devoted to them everywhere, and few of them, very few, are focused on the skirt lengths of the girls. As this was the only redeeming quality I saw in the band, I find this surprising. Many people slightly younger than I must have regarded this band's songs as significant to their development. There's a chilling thought.

Back to Bjorn. He played earlier with other bands in Sweden - a skiffle band, the very popular Hep Singers, and a four man combo called The Hootenanny Singers. They are credited with bringing Hootenanny music to Sweden in 1963. But for foreign releases, this band had other names for purposes of recording only, and on this US release they were called The Northern Lights. 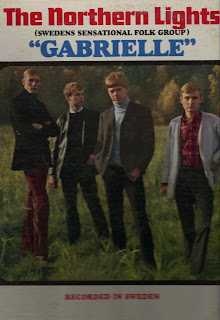 Yes, that's Bjorn there second from right in the blue turtleneck. Surely you recognise Hansi Schwartz on the left, Johan Karlberg in the back, and Tony Rooth on the right? The scary part: I own this album. This scan was done this very evening on my very own machine. I was given it for Christmas 1966, perhaps by my grandmother. As I only listened to the record for about a year, and didn't follow ABBA at all, I didn't know until some time in the 90's that this particular item included anyone from that more famous band. I remember the chorus to "Gabrielle" and the first line of "Jag Vanter Vid Min Mila" in phonetic Swedish - I have no idea what they mean.

I have learned that this turkey is actual slightly valuable. It is apparently very hard to find, possibly because the few Americans who owned it got rid of it. People who care about these things are willing to pay money for this album.

Make me an offer. It's in darn good shape.
Posted by Assistant Village Idiot at 10:20 PM

No money offered, but I will consider an even swap for my Ethel Merman Disco Album. Have your people call my people.

Is this part of your all ABBA, all of the time effort to draw more traffic? :-)

Will ABBA's fan base be able to catapult you to the next level in blogging, as they search for ever more ABBA info?

I was hoping for repeat ABBA traffic to build up a base, but I think I've shot my bolt at this point.

It was of course ABBA who inspired the Wyman boys to start their own, less successful band, CJJB.