I was in a different worship space than usual ten days ago, much larger. I had forgotten how this is a different experience, and influences one's thoughts.  I was much more conscious of that worship being connected to the world at large. I could sense that what was happening there touched the sky. 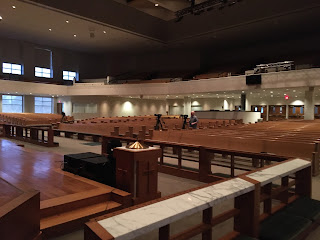 Whether one puts that in terms of evangelism or going out and changing the world, doing good works, it is still different from being in a smaller space, where one's thoughts tend much more to the family effect, and the unity with the other worshipers. Instead of touching the sky, it is touching the heart. "Go ye into all the world," versus "This is my commandment, that you love one another." Both are commands directly from Jesus.  They are not incompatible, but they require different visions, and worship architecture does not easily suggest both.  Larger churches often do have smaller chapels, though my impression is that they are not used much.

Older spaces give one a sense of generations, "hand to shoulder, in an unbroken line" as Bob Bennett's communion hymn says. I used to think of those who had gone before more frequently when I was Lutheran, going up to the rail for communion. A newer space brings your thoughts to the future, I think, and what shall be built after.

The Methodist church I was at in West Houston had a communion rail, though they may regard it more as a prayer rail, in a large rectangle in front of the staged area. I like rails to kneel at in church.  Yes, one can use them to show off how pious one is I suppose, but for me it is more a statement of humility: I am a man who needs prayer and a touch of God.  I admit this before all of you.

The foyer was enormous, which gave me an uncomfortable feeling.  The statement seems to be "how great this building is." It seems pompous, and wasted space. 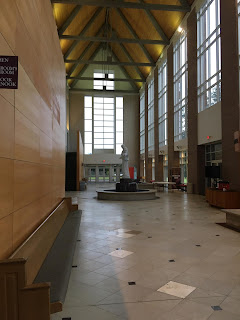 Perhaps that is just an overread from a New England culture which would not have this.  It is certainly a useful space for people to meet and talk to many others without have to noise up the worship space.  Some of us still get quieter in sanctuaries, though not as much as what I grew up with.  Even in a very non-liturgical Congregational church in the 1960's, one lowered one's voice to a murmur if one spoke at all, even mid-week when one entered the sanctuary.  It was a little shocking to be a freshman in highschool joining the adult choir, who spoke out loudly, even across distance in the sanctuary on Wednesday nights.  Or some did, at any rate.  Maybe that was just the basses, always a difficult lot.

The general hugeness quiets us. Even nonbelievers go quiet in respect touring a cathedral.
Posted by Assistant Village Idiot at 4:04 PM

I would love to experience the full Catholic mass in Latin, in a cathedral somewhere, even though I'm not a catholic. Years ago, I saw a Christmas oratorio that was broadcast from the Vatican and I thought, as I watched the chorus, how remarkable a privilege it would be to be able to worship in that way. A profound experience and a blending of tradition, truly beautiful edifices erected in God's glory, all immersed in the ultimate worldly religious community.

The mega-churches of the South leave me cold. They are social clubs, in my view. Many of them spend an unseemly amount of time discussing fundraising as part of the service, and much of the service with sub-groups is organized like a corporate meeting schedule. And don't even get me started on 'Praise Bands'. They are the trailer park of sacred music.

Aggie, sorry that I must seem a deplorable to you, clinging to my guitar and drums and entering deeply into worship with our church’s praise band.

Over the past few years, I’ve come to appreciate AVI’s assertion that we all enjoy certain music for worship, often because it’s tied in with how we came to faith. Many enter in via different means- choirs, organs, drums, bells, etc. I try to be excited that others are finding ways to worship.

I wonder what the acoustics in that foyer are like, with that very high ceiling. Does it sound naturally quiet?

GraniteDad, not at all, I was being sarcastic. I was raised a Unitarian Universalist, and have weathered many an Avant-garde service. Praise Band services are not my cup of tea when it comes to worship, that's all.