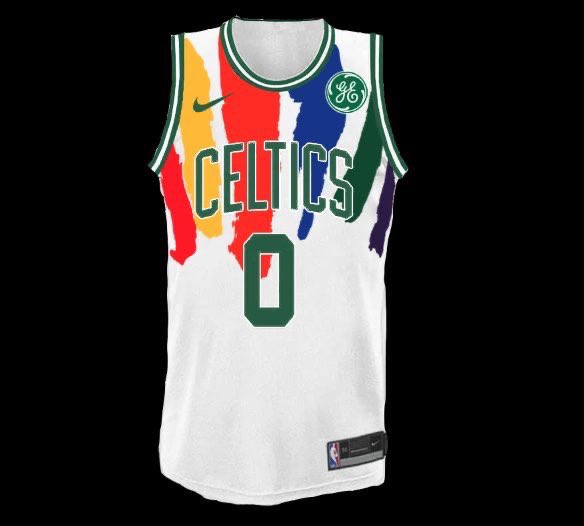 This was proposed - semi-seriously, I assume - as a new city jersey for the Boston Celtics.  All sports teams are getting into multiple jerseys, hats, etc, because they sell very well.  The NBA is in this with all four feet, and City Jerseys are a big seller now.

The design is immediately clear to anyone who has spent much time going through Boston, but likely puzzling to everyone else.  It is drawn from a local iconic public symbol going out of Boston on I93 S. 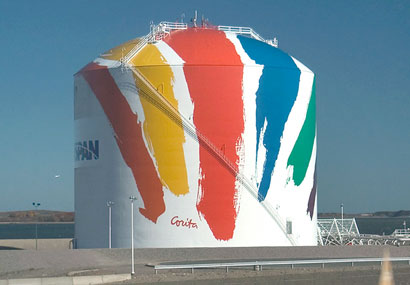 It is an art piece from the 1970's by a woman who came to be known simply as "Corita."  She had previously been a liberal-activist nun, Sister Mary Corita Kent, at a liberal-activist convent in California (this is where my previous knowledge ends and I had to start looking things up) who had become well-known in the art community for integrating everyday objects as high art.  She taught art at Immaculate Heart college and was a memeber of the Immaculate Heart of Mary community.  She returned to secular life in 1968, as her Roman Catholic hierarchy did not like her political-over-religious activism, and her cardinal went so far as to call the order communist.

The most common bit of controversy is the profile of Ho Chi Minh  embedded in the design.  You can see him in profile on the left side of the blue swath. Corita stated this was not so, and because there is sufficient ambiguity in any design of this sort, her defenders always sneered that it was not proven and it was only ridiculous people (not-liberal people) who were paranoid and condemning and overreading such a thing.  She had plausible deniability.  Even now, people will treat you as some sort of kook for even suggesting such a thing. She was non-violent.  She was in favor of peace and love and justice, which were all over her art work.  You, you evil person, are equating being antiwar with being communist.

Granting that in such swaths of artistic stroke it is always possible that accidental resemblances creep in - Fred Flintstone is supposedly in the yellow somewhere - I think it is in fact obvious that it's Ho Chi Minh.  Look at the question not from the you-have-to-spike-the-proof-to-the-center-of-the-earth position, but from the other side.  All of her work was cultural and political commentary.  She was not the artist who said "I just thought it would be pretty to have some bright colors out there for the public to see." There is nothing in her history that fits that.  Therefore, there is commentary in there somewhere, because that is what she did always, every time.  If it's not Ho Chi Minh, what is the bit of popular culture she is integrating into her work?  Keep looking. Yeah, that's what I thought.

Secondly, artists tend to to look at their work pretty closely, and make adjustments if something is undermining their message.

Third it's 1970's Massachusetts, which had plenty of people who just loved the chuckle of "MMpf.  She smuggled in a picture of Ho that all those conservative bastards will have to look at every day when they drive. Priceless."

Yep. It's pretty obvious that there's something special about the blue swath. Whenever there's any kind of irregularity in the painting edge, there's a streak in the white nearby--except by the irregularities that make up the face.
It wasn't obvious who it was without your prompting--I'd have been able to drive by it for years and never notice.
But, yes, it looks like her hero. O'Sullivan's Law at play again--with an organization with social goals. (Supposed to be spiritual goals, but that's easy to obscure.)

Well... at least this post got me to look up images of Ho Chi Minh. I don't see it, and I doubt I'd recognize his image elsewhere. No doubt that I am parochial, but his image seems so "ordinary" to me.

I don't see it. But then, I don't much care. I do wonder what's supposed to be in the square at the top of the page. Mine's blank. Nothing there but white space.

I'll echo Sam and Donna. I sorta see something there on the blue stripe that looks vaguely like a face with a long beard but I couldn't tell you if it's really Ho or just a generic old-fashioned stereotypical Oriental face. I'm tempted to say that the people who DO see Ho are also wishing to see something that may or may not be present, and who's to say she's not messing with them, too?

From a technical aspect I wouldn't put too much stock in trying to discern how clean the edges are. Something of that size reduced down to a photographic image is going to make the lines look a lot cleaner than they really are.

I don't see any resemblance to Ho Chi Minh.

So apparently the original tank got destroyed and the current one (maybe) intentionally toned down the blue stripe, which made me feel better that I'd never seen it:
https://www.atlasobscura.com/places/rainbow-swash

We just passed it in very slow traffic today and my wife remarked she couldn't believe anyone didn't see it at this point, though she admitted that once one has "seen" something, one can't unsee it.

I am alert to the possibilities of confirmation bias and over-interpreting patterns, but I am still entirely convinced it is Ho. I think if you drive by it and see the randomness of everything else compared to the precision and placement of this, it's unmistakable. Plus, as I said, she always had a popular culture insertion and a message, so if it's not Ho, what is the other possible message?

Yes, sentence number three of the abstract: "Disturbed sleep exacerbates core and related ASD symptoms and has a substantial negative impact on the entire family."

C.B. I looked up and inspected a larger picture.

After web-searching for a larger picture, and after looking at it for about a minute, I see the blue part as being the continent of Africa with Namibia cut out. The red to the left of it looks like South America from Buenos Aires on south.

With Africa and South America next to each other, there is a certain resemblance to Gondwanaland. Liberate Gondwanaland? Except in the Gondwanaland juxtaposition, Africa is much further north than in the gas tank panting.

Maybe I would see if differently were I to drive by it.