Originally published October 2011. I was hoping this one would make the cut when I started counting, and was surprised that it has nearly 5,000 hits. I suppose when people are putting a Bing or a Duck on "Lost Nation," they want to learn more than what's on the map. This attracted good comments over the years from people who were from there.*** 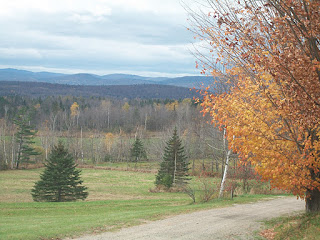 The name has intrigued me since the 1970's.  I fancied at first that it got it's name from being abandoned, some logging or mining small rail destination that got used up - a romantic, even gothic fancy, as might occur to a young poetic type mooning about the landscape.  But people don't name a place as they are going out, only when they are getting established.  Abandoned places only attract names like The Old Mine, or Where Trasker's Farm Used To Be.  You would find a cooler name only in Nancy Drew or the Hardy Boys books.

But Lost Nation, I eventually decided, had to have acquired that name in its early days.  A small settlement might have gone for a decade without naming in the 18th or 19th C, but not much longer.  The town histories of Lancaster and Northumberland offer suggestions for the origin - the settlement straddles that border - but neither source seems quite certain.  Both explanations connect it to some vaguely religious idea, but frame it in the negative - that some visiting preacher or local wag called them that because of remoteness or poor church attendance.  I think that's close, but not in the money.  The time of settlement was very early 19th C, a time when British Israelism was a popular idea, especially in the more exotic sects that struck out to settle new areas.  The idea of the Lost Tribes of Israel was still much in the air not long after that when Joseph Smith received his revelations which assured him that there had been great cities and civilizations on the North American continent.  To be a member of a Lost Tribe was not a bad thing, but a good one.  People would take that idea about themselves as a connection to Bible times, and some hope that they might be favored or important.

I have no evidence from any document, yet find it the more persuasive idea that Lost Nation named itself with no irony or humor intended.  Yes, the place is out of the way, but so is everything else up there, frankly.  Even the big places are small and hard to get to. Things are different Above The Notch.

I went up to find it last Friday.  It didn't look too hard on the map, just a longer distance than one might ordinarily travel for such a small errand. I have been to the area a fair number of times over my lifetime, but not this specific place. I was always going somewhere for work or a high school game, and had no time.

It didn't look too hard on the map.  The name of the place is Lost Nation.  Isn't it fairly obvious what's going to happen next?  Sigh.  When will I learn?

The map said to take North Rd out of Lancaster, then take a left on Lost Nation Rd. Many things are left unmentioned in that description. It's not called North Road until it's well out of town. Before that it's called Middle St (or Mechanic St). These signs do not suggest anything to do with North or Middle anything, do they? (click for the amusing embiggen.) 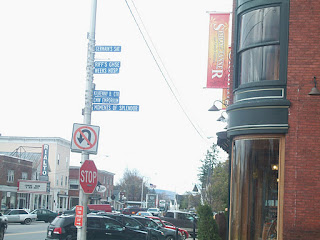 So after three passes to figure that out, I learned that Lost Nation Rd is called Grange Rd where it meets North Rd. And it's only marked from one direction. So that took three passes. But small problem, really. Just irritating. No question when you get there, though. There's a small church that says Lost Nation on it, only used occasionally now. The border between the towns is well-marked. One little interesting bit there. Town lines nationwide are now marked for drivers, going by quickly, and show the name of the place you are about to enter. But the old line markers reversed this: Lancaster was written on the Lancaster side, and Northumberland (or North'd) on its side. The trend is returning in fashionable places, with engraved initials on stone posts.  Goffstown and Bedford now have them. 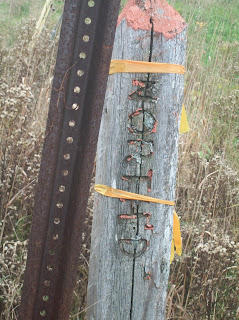 Why move so far up into the mountains to try and scratch out a living? Well, there's paranoia, of course, but I suspect the real reason is that it is so flat. Once you get above the notch, there actually are nice wide patches of farmland. From Ashland to Franconia, not so much. Here and there. If you are  worried about the cold, you really should start looking about 200 miles of here.

It didn't look too hard on the map. The name of the place is Lost Nation. Isn't it fairly obvious what's going to happen next? Sigh. When will I learn?

Many years ago the only "reasonable" route from where my parents lived in Southern California to Sunnyvale where we lived was via Stockton. (Pacheco Pass was a deadly horror and slower than you might think possible.)

Ask my family about the shortcut we tried over Mt. Hamilton one time.

I like your story. You may have a calling if your day job doesn't pan out.

There is also a Lost Nation in Iowa not far from where I live.

A couple of websites about the town.

The Lost Nation town history at the first site agrees with your conjecture about the name being a reference (possibly joking in this case) to the 'lost tribes'.

Yes, I ran across that while reading up on the NH version. Similar obscurity and speculation on origin.

Seems like the spambots have been making real inroads here lately. I wonder how they deal with the word verification?

Yeah, I never have figured that out.

I might need to go back to the shrink for another evaluation. I can not believe I (FSVO "I") wrote that.

There ARE signal processing programs that can handle that level of obfuscation, and I've heard of operations that send THE image to a boiler room full of menials FOR INTERPRETATION and INPUT.

It will be interesting to see what that looks like in the morning.

My Grandparents lived at the beginning of Lost Nation Road, near the Big Rock School House. Cotton families lived on that farm since the early 1800's. I know the area well, a granddaughter of Newell J. Cotton of Cotton's Comments fame in the Coos County Democrat.

My Mother lived in Lost Nation when she was little, my Grandfather Allen P Clark was a farmer there. I was amazed when I went there 30 + years ago and there was still some old homesteads just rotten away, the farm house my mother lived in as a child fell down and all that was left was a roof. Went to Colebrook NH three years ago and it looked very diffrent. A lot of history there.

Thanks for dropping by, Laura. Did you live in Colebrook? I have some updates on people from there.

I grew up in Lost Nation about a mile from Groveton. The only story I heard as a child as to how the area was named went something like this.

In the early 1800's a preacher traveling through the area in the month of August stood at the pulpit of the church located near the town line of Lancaster and Northumberland. That Sunday morning most of the locals were hard at work in the fields bringing in the summer crop of hay. As the preacher looked out over the very meager congregation that summer morning, his first words were "Lord help this poor lost nation".

I currently live on the town line where the photo of the marker. It now has been updated and painted, plus town sogns corrected. One thing to note, MANY delivery vehicles get all turned around by the home numbering, as it doesn't make any sense at all. Most of my neighbors have a lancaster mailing address, as do I. Whenever someone uses GPS to find me, which I am number one, it brings them about a mile away from my home, closer to the rock in your story. Living here in this valley for over a decade has been a blessing. Watching wild life, year after year. Following the families of fox play, deer chasing each other across the fields. A passing moose or a wild turkey or ten. At night the howling of wild coy dogs. One year a linx crossed my yard leaving footprints in the snow, mind you before I got a real good camera with zoom to prove it really was a linx....anyhow, I loved your story and I love living on lost nation.

I am reminded of Mel Brooks' Indian chief in Blazing Saddles.

The post is probably a town bound meant to mark the boarder from a surveying point of view - not for drivers. The bound is usually labeled with the name of the town on the side that is toward that town. I have a granite one in my backyard in MA as the town border bisects it. In MA, the town Select Board is supposed to "walk the bounds" every 10 years.