I did not get up at 3am to see the Iditarod winner come in, but my granddaughter Aurora and I saw 4th-6th place come in the next day, and a few later ones the day after. We had to have repeated discussions that she could not pet the doggies, even though they were almost in arm's reach. The girl does not listen well.  She's one of those you have to get to look you straight in the face and ask her "What did I just say?"

I came up on the same plane as Miss Alaska, Angelina Klapperich, who was at many of the events. She seems a nice enough young woman and must be quite a pianist, if she competed at Miss America with Bumble Boogie.

Aurora was entranced at first meeting, asking if she could have her tiara. She kept circling back around at every event to talk with her, so that Ms. Klapperich eventually recognised her at a distance and would wave. 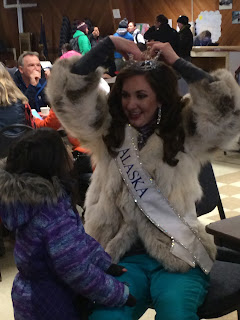 I saw Hobo Jim at the Board of Trade bar that night, and he mentioned Woody Guthrie, as folksingers of our era are likely to do. I chatted with him between sets and said he reminded me more of Rambling Jack Elliot, which I knew would gratify him, as that is another code name to mention. This song is his best known, at least in Nome, where everyone sang along.

The other interesting bit was teaching Aurora to play Sleeping Queens, which her cousins play. She caught on quickly and wanted to play nonstop. We recommend the game.
Posted by Assistant Village Idiot at 9:45 PM

Thank you. Sleeping Queens might be an ideal present for a granddaughter's upcoming birthday.