Well, that has a rugged, outdoorsy, courageous sound to it, doesn't it? Especially in NH, though I'm sure Clingman's Dome is pretty brisk in February as well.

The reality, not so much. This was a wuss version of AT-NH.  I was curious what the AT looked like as it entered NH and went through Hanover, and what the first few miles out of town  were like. The Dartmouth Outing Club maintains the trail there, and historically only the Harvard Mountaineering Club rivals it for young men named Cameron or Bradford or Sumner who take to the strenuous life at every opportunity.  These days, young women named Alexis or Eun Hee may outnumber them, but still, I expected the AT to be treated with honor there. Yet there were no markers through town and across campus.

To confirm the fantasy, the map shows that the Appalachian Trail leaves town right next to the Food Co-Op and next meets a road 3+ miles later at the Montessori School. How Perfect.  I wondered if it were more parkland through this section - a commonly used cross-country trail, used not only by students but families. Perhaps there would be a little shelter where people gathered in the cold with a bit of fire and hot cocoa on weekends. The surrounding towns refer to this as Hanover! after all, and it is the AT. What could be more natural than students in North Face or other polartec, or professors with young sprouts and a yellow lab dashing about. I wondered whether a snowmobile, that noisy middle-american machine that nonetheless grooms trails marvelously, would be allowed.

This is the actual entrance to the trail, in the parking lot of the Co-Op. It took me a while to find it. 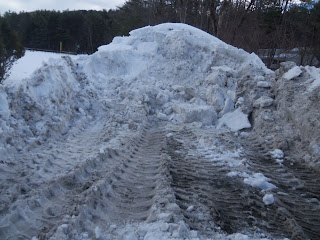 The Food Co-Op itself was as expected. The local foods section is all healthy bakery stuff this time of year, including a deceitful and tasteless oatmeal-raisin scone. Expensive coffees from impoverished countries. A dad admonished his son not to whine in a very standard, non-elite way, but added "Devon, use your words." Ah, yes. After clambering over the plow-pile, there was a meager track with bootprints, paw-prints, and unaccountably, skate-tracks. (I recalled no ponds on the map. A swamp, maybe?) It quickly led to a more recognisable trailhead. 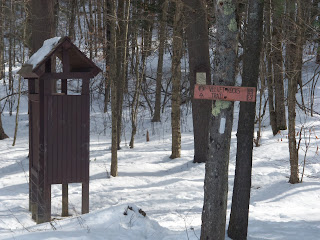 Still, I was disappointed. It was clear that very few people came out here. No crosscountry, no snowmachine - how hard would it be to show a little respect to this important bit of history right under your noses, people?

A quarter-mile later, I came to the first green glass waterfall. Ski-doos can do remarkable things, but this would be a feat. There was no getting up the trail directly, but hands-and-knees, a little to the side, banging away at the crust and grasping branches, I got up over. I did feel a bit queasy about coming back this way. In my expectation of parkland and winter vacation family merriment on the trail, I had had hopes of hiking through and cadging a ride back, but that was dashed in the parking lot. I thought going in a mile or so and retracing, then driving around and seeing a bit of the Montessori side might be a better plan.

I had trouble find the trail on the other side as well. The Montessori School may have closed. I reluctantly determined that this was the entrance to the second leg. 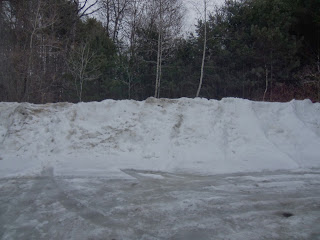 It seems rather unwelcoming, doesn't it? Though this also, once I climbed over, had recognisable trail marking. The trick seems to be We won't show you the trail. But we'll let you know if you've found it pretty quickly. I only count my steps while hiking about 30% of the time now. Yet I must do it without even knowing. I walked in a ways, up a little rise and down into a valley. At the bottom, I calculated how far I thought I had gone and considered whether I should go back. I pondered. 1100 steps, maybe 1300, I thought. Though a number kept occurring to me: 1657. I counted on the way back, and the number of steps was 1670. I count without knowing. I also figured out the ice-skates, which were on this side of the trail as well. They were crampon tracks, which makes much more sense.

Back at the car, I came upon a hiker coming the other way. A woman about 30; blonde, slender, healthy, polartec, ski poles - and a yellow lab frisking about. So the stereotype is not dead yet.

I have learned to my chagrin in the last two years that my navigation is not as good as I imagined.  If they are going to make it hard on me to boot, I will have to limit myself to finding old highways. (Post on that coming.) Those who want to hear more AT adventures can go over to Dubbahdee's at Necat Draco, as he hiked the whole thing.  But he's a pastor now, and can't lie - okay, not as much - so the stories may not be as interesting as they would have been a year ago.
Posted by Assistant Village Idiot at 9:59 PM

The trail is blazed right through town. Some of the blazes, if memory serves, are on the sidewalk, and so may be obscured by snow and ice right now. Most, however, are on telephone poles and such -- painted white rectangles, 2" wide by 6" tall. I think you simply didn't know where to look. I see them every time I pass through Hanover. Of course, even after all these years - 18 now - if you spend every day for 6 months looking for them, the neural pathways aren't too hard to revive I guess.

Hikers are a dime a dozen there. Nothing to see here folks. Move along. ;-)

Now I'm going to have to actually start writing some stories about the escapade so as not to disappoint your readers. Thanks, Coach!

Ouch. I was looking for the A over T logo. Never thought to look for blazes, which should have been obvious.

I think you found a better hike. Hiking thru town, pah! My rescue dog who makes three year olds cower and cry "wolf!" wd rather go the route you found...(to be fair, we used to.fit the stereotype and lost a beloved golden to cancer fr Chinese ingredients in dog food.). My kids never whined. Either good or full scale tantrums--I handled the latter by holding them on hip, brat kicking and screaming, ignoring basilisk stares, and advice by others "just give him the Lifesavers, how would it hurt!", repeating like a mantra " we do not negotiate with terrorists", getting my groceries, and leaving ASAP. I basically didn't care what onlookers thought, never gave in, and the tantrums passed VERY quickly, Autistic meltdowns were another story....

You can see a blaze on the second photo on your post, which, if memory serves, is the trailhead going up out of the athletic field behind the co-op. Next time you go, look for those white rectangles. You'll have better success.

BTW - if you see two rectangles stacked atop another, it indicates a change in direction of the trail - a turn. Sometimes they will be staggered slightly to indicate the direction of the turn. Other times not, simply relying on the common sense of the hiker to figure it out.

Oh I did fine with the blazes once I was even near a forest. That's how I eventually determined where the trail came off the road. That's what makes not noticing them in town on telephone poles so embarrassing. Your identification was correct, BTW. There is a spatial memory thing that I just don't have. I talk with hikers who remember places from years ago that I have forgotten since yesterday.

This is as good a place as any to mention my series from 2 years ago on Wayfinding.
http://assistantvillageidiot.blogspot.com/2011/09/recent-conversations-wayfinding.html