The drive to have the World's Largest Something-or-Other seems strongest in the Midwest, especially upper midwest. The world's largest Muskellunge is in Wisconsin. 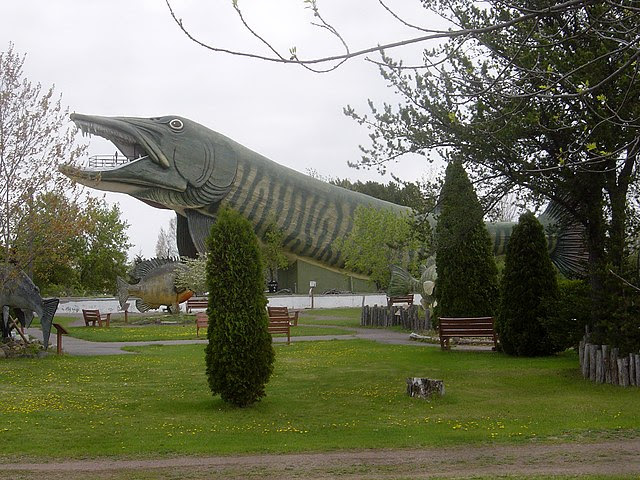 Ohio has the World's Largest Basket at Longaberger headquarters. 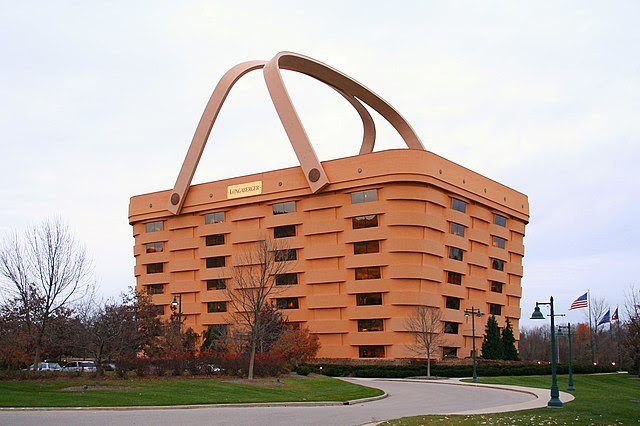 You don't see New England represented much, though we don't seem entirely averse to roadside architecture in general, such as this one in Raynham, MA.

We did have one here in Manchester, the Moxie Bottle House.  I still remember it, though it was in terrible disrepair by the 1970's.

Likely for cultural reasons, though I can't put my finger on it, quite, the other major areas represented on the list are the Canadian provinces across the border from those American states, New South Wales in Australia, and New Zealand.

Related:
Tacky Tourist Photos.
Strange and Unusual Buildings.
and the Wikipedia article on Novelty Architecture.
Posted by Assistant Village Idiot at 8:54 AM

A fish that looks sort of like, but is a little smaller than, the statue. I don't fish for them myself, but IIRC you're supposed to release them if they're less than 40 inches long.

I don't know what the rules are for getting them to release you. People dangling fingers or toes in the water have been bitten. Sauce for the goose is sauce for the gander I suppose.

They show up so much better in flat land with fewer trees--which much of the midwest is. Ah growed up thar.
Gave me the ability to appreciate it and other parts of the country. (Some people never learn that.)

We all have our peculiarities; makes for a more interesting nation. And...people like to go places and make comments about the locals.

Speaking of "biggest"...I've seen this item on the side of the road a couple of times...

It's a larger chainsaw than any man can carry, and it isn't fired up very often.

Iowa has a big fishtoo, about 10 miles from my hometown.

and of course, cows. Not sure if we've got a giant pig anywhere that I know of.

Da Yoopers, I first heard a song by them called Trollin', to the tune of the theme for Rawhide (Rowdy Yates, etc.). Forget just what show they were on.

The milk bottle also appeared as Frates Dairy on Acushnet Ave. in New Bedford, MA. I used to go there as a kid visiting my grandparents (both sides).It's still there but now houses a pizza joint.

I seriously considered bidding on the Moxie Bottle House at one point. Wouldn't that look great in my backyard! Of course I'd be single at that point and the kids would refuse to visit...