I wonder if there is a generational  aspect to suspecting whether an athlete is using PED's.  The athletes I watched growing up had a certain look.  Even exceptional athletes, who worked out in one form or another many hours a week, looked like Roger Federer, as in this Steve Sailer article.  I don't watch much TV or see many photos of the athletes up close, so my impression of what an athlete should look like has a 1970 appearance.

When someone doesn't look like that - when their musculature is far more defined than anything I was familiar with outside of Charles Atlas on the back of a comic book, I immediately think there's something wrong here.

Young people and/or people who see a lot of athletes in close up and popular poses in the media may be much more used to seeing athletes on steroids.  Not necessarily the norm, just more common.  And as a result, they do not immediately recoil at the improbably-shaped athletes.  Their idea of what is possible is slightly different from mine.  It could be my eyes that are wrong, though I don't think so.

Because the money is much better, there is certainly more incentive for athletes to work out intensely.  Yet I think that affects the many, not the few.  There have always been deeply obsessed people - Dan Gable comes to mind.  Do current athletes work out that much more than the few obsessed of yore?  Or are the fanatics pretty much the same in each generation?  I vote the latter.

Certainly, athletes are better now and it is measurable.  But some of that is equipment - shoes, tracks, gloves, and standardization in general.  Medical care, protective equipment, and repair explain still more. Technique is more widely known, and good coaching more available. The 100 meter record came down quite a bit from the time of Jesse Owens to Bob Hayes and Jim Hines.  Yet they look pretty much the same, don't they, even though Hayes was a more muscular type who went on to play pro football.

Look at the shoes and the track under Hayes, BTW. And the guys behind him.  There are still sprinters who look like this.  Just not all of them.

Remember also that when there's groups of professional athletes involved, their unions and attorneys work hard to reduce testing, not increase it. 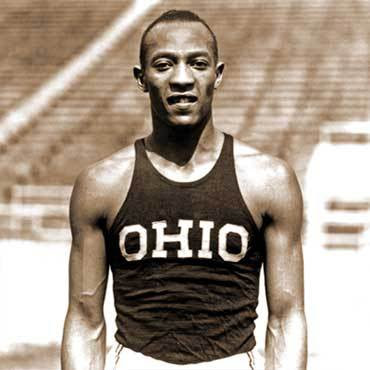 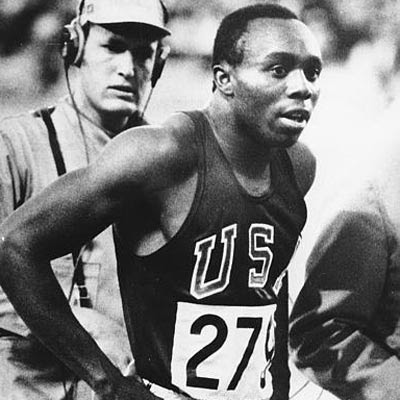 I'm telling you, it's my eyes that are correct here.
Posted by Assistant Village Idiot at 12:14 AM

About athletes I know nothing, but Hollywood stars definitely have looked more ripped in the last few decades. Go on Bing or Google "images" and type in "shirtless" plus any number of names: Daniel Craig, Matthew McConnaughey, Matt Damon, Brad Pitt.