This era that is highly suspicious of running quarterbacks, also has some of the best running quarterbacks in NFL history. Cam Newton, Tim Tebow, and Michael Vick are the source of ongoing barroom arguments: Can they win consistently? Will their bodies hold up under the collisions? Does that much running interfere with passing discipline? Are there more wildcat, single wing, or halfback option surprises being developed, waiting for their perfect moment?

As recently as 2008 a sports columnist could write


When the Minnesota Vikings and Tennessee Titans announced that Tarvaris Jackson and Vince Young, respectively, would no longer start under center, it became clear that the running quarterback era was officially coming to a close. Make no mistake; the mobile quarterback is still alive. Many of today's top players in the position have proven that they can hold composure in the pocket, but also run for a first down when protection breaks down. The running quarterback, however, has officially died.

Most of the great running QB's have actually been effective scramblers who could run well in a pinch in order to get out of trouble. They were mobile quarterbacks, not generally runners. Yet a few were, and they seem to concentrate in the same 70's era: Steve Grogan of the Patriots, Bobby Douglass of the Bears, and Greg Landry of the Detroit Lions.

I first learned of Landry on the local sports pages. The Union Leader was excited that Landry had been a first-round draft pick out of UMass, because Greg had starred for the Nashua Panthers 1961-64. It was an era of Beach Boys "Be True To Your School," which strikes me as more than ordinarily stupid now, but made perfect sense at the time. I went to Manchester Central, and Nashua was a football rival - I would not be rooting for any other school's players, thank you very much. Plus, he was going to the hated Detroit Lions, who had ruined my Green Bay Packers' perfect season on Thanksgiving Day in 1962. Just a few years later, after reading Paper Lion, I relented in my Detroit hatred, and as highschool progressed and I got a sense for how few pro athletes, especially football players, came out of New Hampshire I developed some pride in Landry. 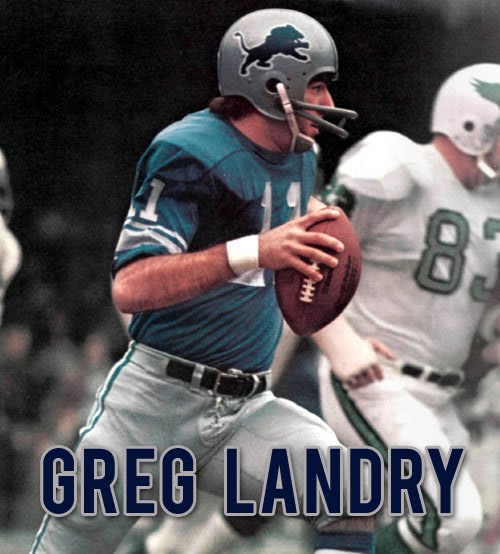 He was actually picked for a Pro Bowl, and was not a bad throwing quarterback at all. But his reputation throughout his career was as a quarterback who ran intentionally, either on draw plays or roll-out options. In the modern era, coaches would insist that he stay put more, and the word on him would be that he had diminished a fine passing career by bailing and running too quickly. That strategy worked well with quick-to-elope throwers like John Elway and Steve Young. Either could have been excellent running quarterbacks in the pros, as they had been in college. And then maybe not have gone to the Hall of Fame.
Or the game could be changing again...
Posted by Assistant Village Idiot at 6:42 PM

Greg was my hero growing up in Muskegon, and have wonderful memories of him scrambling. But, shoulda stayed in the pocket to pass. Never the less, my fave at QB in the 70's!