A Place In This World

John-Adrian just called about a letter he received up in Nome. The County court in Oradea is inviting him to come to a hearing in February to state his opinion about the disposition of his recently-deceased father's house in Sârbi, a nearby village. The name signifies that it was once a village of Serbs, in some long-distant past. Either of my two may have some Serbian ethnicity in them. Of course, in that part of the world everyone is everything, except they all deny they have any Gypsy in them.

It's all very Romanian. The neighbors claim that Gheorghe gave them the house in exchange for them caring for him in his last years, but have no paperwork. Chris and JA's aunt - not their father's sister but their mother's sister - has wanted the house for years. (She's has been a rather grasping sort for years.) The youngest sibling, Ina, just turned 18 and is thus of legal age. The court believes the oldest sibling, Catalin, is deceased, but he's quite alive, working in Norway nine months of the year with his wife Crina.

There is a lot of background information on the court documents, including things John-Adrian never knew about his father before. Not surprising, as his father gave him to the state when he was nine or ten.

So Chris and JA may each have rights to a 25% share of a house something like these. 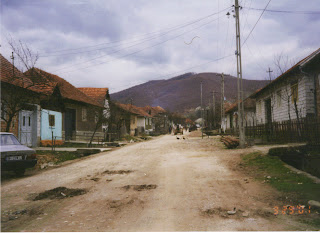 Awesome - reminds me of the epic battle raging over my grandparents' ramshackle house in northern Maine. Things are the same all over the world.